Team Player, No Russian, The Only Easy Day... Was Yesterday, The Gulag, Of Their Own Accord, Second Sun, Loose Ends, The Enemy of My Enemy, Just Like Old Times, Endgame, Prologue, Persona Non Grata, Mind the Gap, Bag and Drag, Iron Lady, Scorched Earth, Down the Rabbit Hole, Dust to Dust, Time and Fate, Suffer With Me, Blackout

These helicopters are seen in the first two Call of Duty: Modern Warfare 2 gameplay teasers. In the teasers, the helicopters carry a couple of men like normal helicopters and head towards "The Gulag". In game, the player rides beside Soap during a raid on "The Gulag" and provide support by taking out enemy soldiers. An AH-6 helps out by attacking AA positions. The player is then dropped onto the ground via the MH-6 to begin the raid. Little Birds are also seen in the campaign being piloted by Shadow Company and Nikolai in "Endgame" and by the SEALs in "The Only Easy Day... Was Yesterday".

In multiplayer mode, the MH-6 Little Bird is available to drop in the Care Package Killstreak. The MH-6 flies very quickly, and slows down only when it is over the red Care Package smoke, making it extremely hard to shoot down. However, if the player does shoot it down, he will not receive any experience points from it. An AH-6 Overwatch Little Bird was supposed to be in the multiplayer mode but got scrapped just before release date.

The Little Bird appears in the following missions as support:

Enemy Little Birds are seen in the following missions:

Army Rangers boarding on the MH-6 at the end of the "Team Player".

Enemy Little Bird in "The Only Easy Day... Was Yesterday".

Little Bird used by Russians. Note the sniper rifle used by a man in a helicopter.

A close-up of the Shadow Company Littlebird. Note that there is no pilot.

Nikolai's Little Bird in "Endgame". Note that there is no pilot.

The MH-6 Little Bird makes an appearance in Call of Duty: Modern Warfare 3, first seen in the reveal trailer. It first appears in the mission, "Mind the Gap", as a SAS support helicopter flying near Westminster Station in England. They are used mainly by Delta Force, though two with a "civilian" paint scheme are used by Makarov during his escape attempt. They also appear as enemies in Survival Mode. It is seen in multiplayer as an Assault Strike Package Pointstreak, the AH-6 Overwatch and returns as the helicopter that delivers the Care Package pointstreak.

In Survival Mode, the Little Bird is armed with a minigun which can kill in two successful bursts and eliminate entire friendly squads quickly. It can take much more damage compared to Call of Duty: Modern Warfare 2's Little Birds. Sentry guns can engage the helicopters, but the Grenade Sentry is usually ineffective as the helicopter tends to maneuver a lot and grenades usually miss the intended target. The Minigun version of the Sentry Gun is relatively effective, but it is not recommended to use them against the Little Birds. Sentry guns are easily disabled by the little birds so it's best advised to hide the sentries indoors or gun down the helicopters as fast as possible to prevent worry. Each Little Bird destroyed grants the player $600.

It is possible to shoot down the Little Bird with a pistol, but this is highly ineffective, and should only be used as a last ditch effort to destroy it. Little Birds spawn as close to the player as possible, like Juggernauts, and will dramatically burst into flames and spin out when shot down. Interestingly, if the player is facing the area they spawn and sees them appear (easily done near the Air Support Armory on Underground), only one Little Bird will move to the map, and the other one will stay completely still until it takes damage. If shot down before it moves to the map, it will spin out in flames until it comes to the map, then spin around some more before finally exploding. It is not possible to get killed by the debris from a Little Bird. The health of a Little Bird is set at one level, and will only increase by a small margin on succeeding levels. They can usually be destroyed with a little over a full magazine of assault rifle fire. It is possible to destroy Little Birds with air strikes or Predator missiles, but only the missile is effective, as the air strike requires luck rather than skill.

The Little Bird appears on various missions as friendly or enemy forces.

A view of the Little Bird from the rear.

An AH-6 firing its guns. Note that the aircraft has no pilot.

Front view of the white Little Bird in "Dust to Dust".

In "Down the Rabbit Hole".

The white Little Bird as seen in "Dust to Dust".

The MH-6 Little Bird returns again in Call of Duty: Black Ops II where it can be seen on map Hijacked, on a helipad where it has a white paintjob. Several Little Birds are also seen in mission Suffer With Me where they are escorting the Navy Seals before they reach the shore at which point they will fly off and can be seen at certain other points flying by in other parts of the mission. Its role is less prominent than it was in Modern Warfare series. It is no longer main transport helicopter; VTOL most likely replaced it. It also appears at the end of the mission Time and Fate.

Little Birds in the mission "Suffer With Me".

The Little Bird was cut from Call of Duty: Ghosts.[1] It was set to be a Pointstreak. Audio files can be found in the game for it.

The MH-6/AH-6 Little Bird returns in Call of Duty: Modern Warfare and Call of Duty: Warzone as the Heli. It is available for use in Warzone on the Verdansk and Rebirth Island maps. It is also seen in the campaign.

In “Embedded”, two MH-6 Little Birds are supposedly seen near the end of the level. The player is required to plant C4 on the cockpit and detonate the explosives. These supposed MH-6s belong to Barkov’s Forces. During “Proxy War”, Barkov’s Forces MH-6s are supposedly seen strafing Urzikstan Liberation Force members during their mission to annex an air base. Three MH-6 Little Birds, callsign Lifter One, are seen in the mission “The Wolf’s Den”, who drop off the Special Air Service teams during the beginning of the level. Little Birds are also seen during the pre-cutscene for the mission “Captive”, carrying U.S. Marines and Omar “The Wolf” Sulaman’s body. In addition, during the end-cutscene of “Going Dark”, a Little Bird is seen carrying Hadir Karim before he is transferred to Russian custody. Finally, during “Into the Furnace”, Barkov’s Forces supposed Little Birds are seen strafing again. This Little Bird can be destroyed. 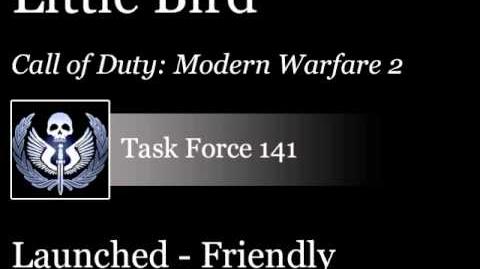