"Designed for the mobile marksman, the MK14 fires highly accurate, high damage single round shots. Two hits to the body and your target's a goner. Pace your shots and keep cool through fire to dominate as effectively as any full auto assault rifle."
— Call of Duty ELITE description

The MK14 is Grinch's primary weapon in all Delta Force missions except "Bag and Drag" and "Hunter Killer", in which he uses an M4A1 and an MP5 instead.

The MK14 is unlocked at Level 60. It has a low capped rate of fire, but it has high power, as it kills with two hits to the chest or one headshot at close-range, and three or shots to the body at long-range. It will also kill with two shots at range if one is a headshot. Considering that this rifle has one of the longest effective range of all assault rifles, most of the time it should only take two shots to drop a target. Its recoil is very controllable compared to the M14 from Call of Duty 4: Modern Warfare, especially when combined with the Kick proficiency.

Due to its high damage and hip-fire accuracy, it is often favored in Hardcore game modes as a makeshift sniper rifle if using the Attachments proficiency and equipping an ACOG Scope or Thermal Scope, and Suppressor, as the silencer's range penalty is mitigated by the fact that it is still a one-hit-kill at all ranges in Hardcore mode, unless the target has a Ballistic Vest, however, a headshot will kill anybody regardless of whether or not the target has a Ballistic Vest instantly on Hardcore, either way both are still effective.

Rapid Fire has a unique effect on the MK14; because the weapon is semi-automatic, Rapid Fire simply raises the firecap, allowing for marginally a faster fire rate. This can be useful in close-quarters and when facing many enemies that need to be quickly dispatched; however, for most situations, it is not necessary.

Another unique part of this weapon is the Shotgun (Attachment). Equipping the Shotgun dramatically increases visual recoil when firing the rifle. The sights kick back heavily, making it more difficult to accurately place follow up shots, except when paired with the Thermal Scope, which eliminates the visual recoil.

The MK14 is available in Survival Mode from level 47 and costs $3000. Using this weapon is questionable because its fire rate makes it an unfavorable weapon in close-quarters but its high damage means that the player does not need to go for headshots as early as other guns.

Grinch's MK14 with every attachment
Add a photo to this gallery 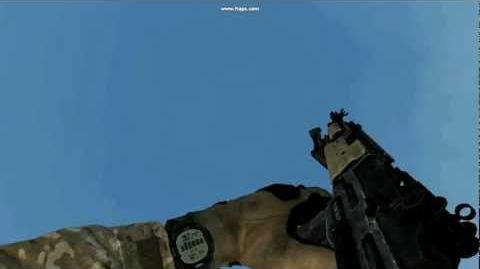 The MK14 returns in Call of Duty: Advanced Warfare.

Retrieved from "https://callofduty.fandom.com/wiki/MK14?oldid=2166720"
Community content is available under CC-BY-SA unless otherwise noted.