The MK32 is a six-shot grenade launcher featured in Call of Duty: Ghosts that fires Semtex grenades.

The MK32 is available in the mission "Struck Down", equipped with a Holographic Sight, and it is semi-automatic. In the beginning of the level, the Semtex grenades fired on enemy vehicles do not explode directly, being blown up using a detonator instead. However after this part, the fired grenades explode instantly after sticking to a surface, almost like normal impact grenades. Furthermore, the grenades have a "safe distance", unlike in multiplayer and Extinction.

The MK32 is purchasable as a secondary weapon. It does not have sights. Instead, the screen zooms in slightly. It fires two Semtex grenades at a time, and has six rounds loaded per cylinder. The rounds fired by the MK32 count towards Semtex challenges. Furthermore, it cannot be reloaded mid magazine, though this doesn't matter as it only comes with one magazine to start and magazines cannot be scaveneged or added with Fully Loaded or Scavenger. The two shots it fires recoil considerably, making it hard to get the two shots in the same place. Moving the aim down while the weapon is firing may help. Overall, this weapon is best used to clear or capture objective points from enemies, or to remove a camping enemy from a short distance.

The MK32 Launcher appears in Extinction under the Equalizer category and costs $2000 to deploy. When fully upgraded, its name becomes the MK32 Flame Rounds. It does not fire in two-round bursts like in multiplayer, instead simply being semi-automatic, and it fires grenades that explode on contact instead of Semtex. Like with the Kastet, the player can aim down the sight with the MK32 Launcher, but this does not bolster accuracy in any tangible way. The player is not required to aim down the sight to fire accurately.

Like with the Death Machine, all other ability items and weapons are prohibited from being used while the MK32 Launcher is active, except for the Melee attack. In addition, the player is unable to interact with Search Piles when the MK32 Launcher is in use. The player cannot discard the MK32 Launcher until it is completely out of ammo. For these reasons, users must be extremely careful when buying the MK32 Launcher, as doing so severely limits what the player can do while it's active, something that can be very detrimental to a team if the user is tasked with providing key supplies such as Ammo or Armor.

The last upgrade doubles the MK32 Launcher's ammo loadout to 12 grenades by simply adding 6 grenades in reserve. Users will have to reload to access these 6 grenades, and the reload can only be initiated by emptying the cylinder. The reload speed of the MK32 Launcher is extremely slow, and even worse, because On the Go is equipped by default in Extinction, it is very inconvenient to Reload Cancel this extremely slow and cumbersome reload. Users must be very careful when reloading the MK32 Launcher as a result. Despite the added danger of reloading, the last upgrade is by far the strongest upgrade the MK32 can get. With the doubled capacity, by either efficiently killing multiple Cryptids at once or targeting larger Cryptids, the MK32 Launcher allows users to more easily make a return on their investment.

The MK32 Launcher, even when fully upgraded, performs very poorly against Rhinos, and users should either refrain from using the MK32 Launcher when Rhinos are around, dump the remaining ammo in the MK32 Launcher to access the user's other weapons, or if possible, allow teammates to deal with Rhinos.

MK32 with a Holographic Sight attached.

Reloading. Note that the cylinder clips through the Holographic Sight. 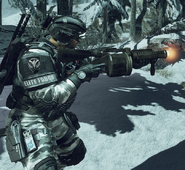 A Soldier holding the MK32.