The MM1 Grenade Launcher is a Special weapon available for use in the campaign mode of Call of Duty: Black Ops II. It can be unlocked by completing five challenges in the mission Old Wounds.

The MM1 is incredibly powerful, with a massive magazine storage of 24 rounds. However, the player's mobilty is highly decreased while the MM1 is equipped, and the rate of fire is very low, more so than the War Machine. The MM1 has no iron ights, so instead, the player zooms in and the reticule stays on-screen to stand in for the lack of sights. 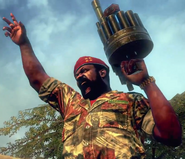 Jonas Savimbi holding an MM1.
Add a photo to this gallery

Retrieved from "https://callofduty.fandom.com/wiki/MM1_Grenade_Launcher?oldid=2073606"
Community content is available under CC-BY-SA unless otherwise noted.