The MORS is the most common sniper rifle in the campaign. Despite this, it is still quite rare. It can be found in the missions Fission, Aftermath, Crash, Bio Lab, Collapse, and Armada. It is a one-shot kill on most enemies and usually comes with a fair amount of ammo, but additional ammo is very rare; resupply crates are useful in this case. In Collapse and Armada, it is also seen held by Sentinel soldiers from helicopters.

The variant that can be picked up in "Crash" (after getting out of the ice cave) is unique in that it is magazine-fed and semi-automatic, but with a lower rate of fire than the standard single-shot MORS. It has a magazine capacity of 10 rounds and fires explosive rounds, as well as having a unique bullet trail effect when fired.

The MORS is unlocked at level 8, and is the second sniper rifle unlocked by the player.

The MORS is a high damage weapon. It can one-hit kill with neck, torso and upper arms shots, making the weapon very effective to take down a target at long range. With a single headshot, one can also kill a Exo Stim user. However, the single-shot nature severely limits the weapon's usefulness in taking down multiple targets. Its reload animation, similar to cycling the bolt of bolt-action sniper rifles from previous games, lasts for 1.2 seconds, limiting the maximum potential fire rate to 47 rounds per minute. Another drawback is that the MORS cannot be speed reloaded. An advantage of this nature, however, is that magazine size is a negligible factor; there is no need for extra reloading every few shots.

The MORS has average handling traits. The hip-fire cone is very large, the aim down sight speed is 400 milliseconds (shared with other sniper rifles), and the player moves at 90% of the default movement speed when carrying the MORS.

The MORS is favorable with handling characteristics, as there is minimal sway with the weapon, and the scope has a clean reticle.

The MORS benefits from the usual attachments selection. The Ironsights and the ACOG Scope can help the user using the MORS at medium range, as the Ironsights decrease the ADS Time to 300 milliseconds, and the ACOG Scope has lower idle sway and scope magnification. The Variable Zoom Scope and the Thermal, on the other hand, can help the user at long range, as the Variable Zoom Scope has higher magnification, and the Thermal can highlight enemies. The Stock is also helpful as it allows the player to move faster while aiming down the scope. The Ballistics CPU further decreases idle sway, making firing precisely easier without holding one's breath. Finally, the Tracker highlights enemies that were hit by the MORS but survived, which can help the player localize an enemy as the MORS is not a guaranteed one-hit kill.

The MORS has some good variants to use. The Quick Bolt decreases the reload time to 1.1 seconds, increasing the maximal potential fire rate to 51 rounds per minute. This makes taking down multiple targets easier as the player has less reload time. However, the player moves at 88.2% of the movement speed. This is a minor drawback.

The Penetrator and Ransacker both increase the damage multipliers of neck and chest shots, which will allow the player to one-hit kill Exo Stim users with a single head or neck shot. The player will also move at 91.8% of the movement speed and the idle sway will be reduced by 8% for the respective variants. However, the sprint-out time is increased by 10% for the Penetrator, and, akin to the Quick Bolt variant, the player moves at 88.2% of the movement speed for the Ransacker. The reload time for both variants is increased to 1.3 seconds, limiting the maximum potential fire rate to 43 RPM.

The Silver Bullet has the same multipliers bonus as the Ransacker variant, but also increases the multiplier of lower torso shots. Like the Penetrator and the Ransacker, the player can one-hit kill Exo Stim users with a single head or neck shot, and chest and lower torso shots deal higher damage, which makes a difference in a few cases, such as against Exo Stim users. Similarly to the Ransacker variant, it also decreases idle sway. However, it has a large drawback of longer reload time, 1.4 seconds instead of 1.2, limiting the maximal potential fire rate to 40 rounds per minute. This makes taking down multiple targets more difficult as the player needs more time to reload after each shot. Contrary to what the in-game stats say, there is no handling change whatsoever.

The Doctor is very similar to the Quick Bolt variant as it increases the fire rate as well. It also decreases the ADS time. However, there will be 10% more idle sway and the movement speed will be reduced to 88.2%.

The MORS in first person. 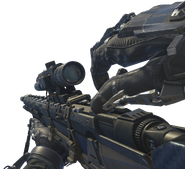 Aiming down the rifle's scope.

The MORS would make a return in Call of Duty: Mobile as an Operator Skill, but was cut.

It will be one-hit kill, working similar to Annihilator. It appeared to be played on Chinese Alpha, however after this, It never appeared again and was cut from the game. [1] Later and his last appearance, it was on Cinematic Trailer before the game release.