The MP-443 Grach is used by Keegan (with Akimbo) in "Struck Down" and by Rorke in "Sin City". It is also used by Federation soldiers in "Severed Ties" and "The Ghost Killer", where they can draw it from their holsters after running out of ammunition (except for those who were using the PDW as their main weapon, in which case it will remain their only firearm). The MP-443 can be obtained sometimes with Akimbo.

The Grach appears in Multiplayer, and it costs 4 squad points, making it a very inexpensive weapon.

It has the highest firecap of all semi-automatic pistols, as the firecap goes up to about 800 RPM, if the player can pull the trigger as fast. This is counterbalanced by a very low range, however, as the 2-shot kill range stops at around 2 meters, meaning that almost every engagement will require 3 to 5 bullets on the enemy. This very low range is also remedied by a nearly non-existent recoil pattern, to compliment the Grach's high rate of fire. Another good attribute is that its reload time is very fast, even without Sleight of Hand, only being surpassed by the M9A1.

However, its easy-to-handle attributes are severely counterbalanced by a very small 10 round magazine, the 2nd smallest in its category. As such, Extended Mags will be a major help on this weapon in order to be able to place more bullets on enemies. And due to its extreme power in close range, it is one of the best pistols to use Akimbo. However, Akimbo will make ammo become scarce in a very short time, as only 1 reload per pistol is given upon spawning. This makes Scavenger and Fully Loaded almost required via compulsion in order to use it for prolonged times. The Silencer serves to be very effective on this pistol.

Due to the key weaknesses of the Grach, making a class around it is very difficult, as attachment selection is extremely important in order to make the Grach perform well, and that ammo will be very scarce if not using Scavenger or Fully Loaded. Due to its very large weaknesses, this is one of the least popular pistols in Multiplayer, as it is often overlooked by pistols that supply more ammunition and range.

The MP-443 Grach makes an appearance in Safeguard mode as the starting weapon. It automatically comes equipped with Extended Mags. Its reserve ammo regenerates over time (one bullet every 1.5 seconds), making it a good weapon to keep in case the player runs out of ammo with another gun.

The MP-443 Grach appears in Extinction. This time it is fully automatic unlike its campaign and multiplayer counterparts, and has a 15 round magazine by default. Compared to the other handguns, the MP-443 is the weakest per shot and has the second lowest range, having double the maximum damage range of the .44 Magnum.

However, it does have fully-automatic fire and a decent sized magazine (especially when upgraded twice). This pistol may be preferred by players who don't have a decent enough trigger finger for the other handguns, and is also favored by players that need some extra firepower up close. 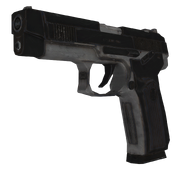 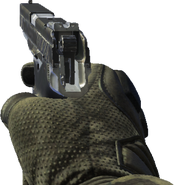 2-round burst
(Semi-automatic in Sentinel, SP)

The MP443 Grach returns in Call of Duty: Advanced Warfare, this time with a 2-round burst firing mode. 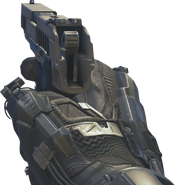 The MP443 Grach in first person 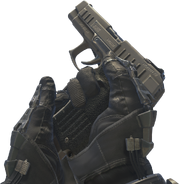 Reloading
Add a photo to this gallery
Retrieved from "https://callofduty.fandom.com/wiki/MP-443_Grach?oldid=2166785"
Community content is available under CC-BY-SA unless otherwise noted.