For other uses, see MP.
For a similarly named weapon, see MAC11.

The MP11 is a submachine gun that appears in Call of Duty: Advanced Warfare.

In the PC and next-gen versions of the game, the MP11 is used by the KVA throughout the campaign, as well as by Atlas hazmat suit soldiers in "Bio Lab". In the Xbox 360 and PS3 versions the weapon is only found once, in "Traffic", at the start of the shortcut through the alleys.

The MP11 is a submachine gun, and is unlocked at level 1.

The MP11 is a low damage per bullet weapon. At any range smaller than 12.5 meters, the MP11 will deal 30 damage, resulting in a four shot kill to anywhere in the body, or a one shot kill in Hardcore. At any range between 12.5 meters and 27.5 meters, the MP11 will deal 24 damage, resulting in a five shot kill (a four headshot kill), or two shots to kill in Hardcore. Any range past 27.5 meters will make the MP11 deal 19 damage, which is a six shot kill (five headshot kill), or a two shot kill in Hardcore. This damage profile is low for a sub-machine gun standard, as it won't be dealing as much flinch as other sub-machine guns can and will, alongside its smaller range profile compared to other Submachine guns. To add on to this, the MP11 has low penetration power, making it a struggle to shoot through almost any surface.

The MP11's strong suit is its rate of fire. The MP11 fires at 923 RPM, which is the fastest of all non-SAC3 submachine guns. This makes up for the poor damage per bullet, and makes the MP11 have a fast four shot kill in its category.

Accuracy is a mixed bag. The recoil per shot isn't very much, but the recoil will accumulate quickly due to the high rate of fire, and will easily cause the MP11 to drift off course. The MP11's visual recoil kicks the sights mainly to the sides, and upwards. The iron sights on the MP11 are relatively easy to use, but are somewhat small.

The MP11 has above average handling traits. The aim down sights time is quick, at 200 milliseconds. The hip-fire cone is tight, making it effective when in a pinch. The reload time, however, is somewhat slow for a submachine gun, taking two seconds to do a full reload, 2.5 seconds to do an empty reload, but takes only 1.5 seconds to do a speed reload. Do note that the add to gun time does not match up with the animation, as the animation will finish slightly before the gun is considered "reloaded". This must be accounted for, as it can easily get the player into trouble within heated firefights. An oddly good handling trait with the MP11 is its very quick sprintout time, being more than twice as fast as all other SMG's (80 milliseconds vs 200 milliseconds), and being among the fastest sprintout speeds in the game. As such, Gung-Ho might be considered overkill on the MP11.

The MP11 has a 32 round magazine. This is the smallest magazine size in its category, tied with the SN6 and the SAC3. However, the magazine size is acceptable. However, reloads will be frequent due to the faster rate of fire, and reserve ammunition will be depleted rather quickly if not playing conservatively.

The MP11 gets an unusual assortment of attachments, as Dual Magazine is not available for selection. The optical attachments see little benefit for the weapon's nature of being a close-quarters weapon, and that the iron sights are easy to use. The Foregrip can greatly help the user to control the MP11's recoil in general, and can aid when spraying with fully automatic fire.

The Laser Sight doesn't give too much of a benefit to the hip-fire cone, but it can be useful for a player who will be actively engaged in close quarters combat. However, some players will survive without the attachment as a whole. The Tracker can be useful if the player injures an escaping enemy, as it allows the player and their teammates to pin down the escapee. The Parabolic Microphone works well at exposing suppressed gunfire, and can easily help the player in exposing the enemy, and eventually killing them.

The Stock and Quickdraw Grip attachments aren't as useful on the MP11 compared to Assault Rifles and Light Machine Guns, as the MP11, and all sub-machine guns in general, have superior handling traits with strafe speed and aim down sights time. However, they can prove to make the user extremely reactive and mobile, and can help them secure kills easier due to easier strafing and swifter aiming.

Advanced Rifling increases the 30 damage range out to 15.8 meters compared to 12.7 meters, and extends the 24 damage range from 21.6 meters out to 27 meters. This can help if the player doesn't want to bother with the sluggish six shot kill, as that extra range can potentially make the difference in a firefight.

The Suppressor also isn't a bad option for a flank oriented setup, as the benefit of being off of the mini-map when firing can be invaluable when playing against enemies who are reliant on the mini-map. However, the 30 damage range is retracted from 12.6 meters to 9.5 meters, and the 24 damage range is also retracted from 21.6 meters to 16.2 meters. It is recommended to use Low Profile in conjunction with the Suppressor, as the stealth benefit can be potentially ruined if a UAV is active. It should also be noted that Parabolic Microphone users will still detect the player's gunfire.

Rapid Fire is a risky attachment to use. The rate of fire gets a significant increase to 1153 RPM, but the 30 damage range is reduced from 12.6 meters to 10.7 meters, recoil per shot is increased by 20%, and the hip-fire cone becomes 20% larger. The MP11 becomes extremely hard to control in general when using the attachment, and unless the player can counteract these downsides, the attachment should be avoided in order to retain the MP11's practicality.

Extended Mags increases the magazine size to 48 rounds, and increases the starting ammunition loadout by 50%. This can be a possible alternative to Scavenger, and the attachment suits the MP11's ammo-burning nature, as it postpones the need to reload in some instances, and is helpful to have extra ammunition at hand.

The MP11 has some good variants to consider. The Goliath variant has a very large damage increase, increasing the medium range damage from 24 to 30, making it a four shot kill out to 27.5 meters. This effect is extremely evident in Hardcore, as this range is still a one-shot kill. As well, the minimum damage is increased from 19 to 24, making it a five shot kill by default at any range outside of 27.5 meters. Considering the MP11's nature, such a damage profile makes for a great benefit, as the weapon's time-to-kill will feel much faster and consistent. However, the Goliath has a big downside in that it has a 30% wider hip-fire cone. The hip-fire cone of the Goliath is near-completely outclassed by other sub-machine guns, and performs more similar to an Assault Rifle in terms of hip-fire.

The Squeaker has a large rate of fire increase, as it fires at an extreme 1200 RPM. As well, it also has a free Red Dot Sight, which can be helpful for players who want better iron sights. However, the recoil per shot is increased by 20%, and the faster rate of fire further emphasizes this large recoil increase. Using Rapid Fire on the Squeaker is unnecessary, as the player will burn through ammunition quickly, it will raise the rate of fire to somewhere around 1400 RPM resulting in the recoil becoming next to unbearable, and is generally considered as overkill due to the already monstrous 1200 RPM. However, if the user is proficient at using weapons with extreme RPM values, the Rapid Fire attachment might come in handy for some players. Using a Foregrip is very important in general to counteract the Squeaker's accuracy deficiency.

The Deceiver has a minimum damage increase from 19 to 20, making it a five shot kill at long ranges compared to a six shot kill. However, the recoil is increased by 10%. This penalty isn't very major, and is easily mitigated by the usage of a Foregrip. The Deceiver gives the MP11 a more consistent damage output, as the MP11 Deceiver will always be either four or five shots to kill.

The Toxic has a rate of fire increase to 1090 RPM, and has a 10% tighter hip-fire spread, making the MP11 Toxic very close-quarters oriented. However, its minimum damage is reduced from 19 to 16, making it a seven shot kill at long ranges, and the recoil is increased by 10%. The MP11 Toxic is a variant that gives great benefit to players who stick to close quarters gunfights, as their hip-fire performance is vastly increased, and at close quarters combat, its downsides are near-irrelevant.

The MP11 also appears in Exo Survival. It costs 1 upgrade point to buy, and is unlocked at round 2.

It is a weapon that is generally effective, sporting sub-machine gun handling traits, as well as a high rate of fire and moderate recoil, but only a 32-round magazine capacity. It is an effective weapon for players who use a "run and gun" playstyle, but not as effective if wanting to camp in an area, unless the player wants a good backup weapon with high mobility as an escape option. It is also good for when trying to complete the objective of collecting dog tags, or if needing to get to an objective fast, such as an EMP bomb for the defuse objective. Overall, its effectiveness depends on the player's situation and playstyle.

The MP11 appears in Exo Zombies. It is available as a wall weapon. Its magazine capacity is increased to 35 rounds, and it holds a decent 220 rounds in reserve.

Overall, it is a pretty effective weapon for the player to use or keep as a backup weapon. Not only does it have sub-machine gun handling traits, but ammo can also be bought off the wall for it (effectively countering the MP11s high ammo consumption). One big downfall of it is its low range, though this shouldn't be too big of a problem due to the playstyle of the game mode. Exo Reload and Exo Health are effective exo upgrades to use with the MP11, as the player is likely to be a lot mobile and get hit by zombies, and Exo Reloads allows the player to quickly reload, which reduces the issue of being vulnerable while reloading. Exo Soldier is also effective, as it allows the player to shoot and reload while running.

The MP11 is located in the following locations:

The MP11 in first person.

The iron sights of the MP11. 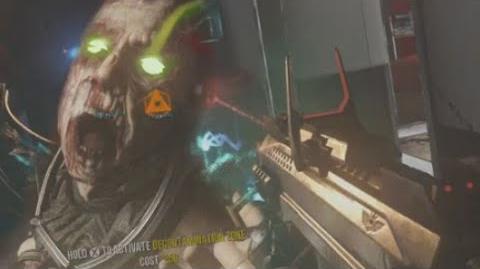