For the compact variant, see MP5K.
For other weapons, see MP.

The MP5 is the first submachine gun used in the Modern Warfare series campaign. The MP5 can be found frequently, being used by the Ultranationalists in the missions, "Blackout", "Hunted", "Safehouse", "One Shot, One Kill", "The Sins of the Father" and "No Fighting In The War Room". In "Shock and Awe", Pelayo uses an MP5 in her efforts to fend off Insurgents after her helicopter is downed and she is awaiting reinforcements.

The "MP5SD" is a variant with a built-in suppressor (as opposed to multiplayer where the silencer is an attachment) and it is used by the SAS in "Crew Expendable", "Ultimatum" and "Mile High Club" and by Soap in "F.N.G.".

In multiplayer, the MP5 is available at level 1, in the default class "Spec Ops", and can be equipped with a Red Dot Sight, Silencer or ACOG Scope. It is one of the more popular submachine guns in multiplayer because of its low unlock level, relatively controllable recoil, and high damage at close range. The MP5 kills in three-to-five shots, and two-to-four shots with Stopping Power equipped. It has very high damage and range for a submachine gun, being a three-shot kill up to 18 meters and being a five-shot kill at 25 meters. Head shots generally decrease the number of bullets to kill at most ranges by one. As with all sub machine guns, the MP5's high damage at close range drops off very quickly, making it very competitive at close range but inferior to weapons such as assault rifles or sniper rifles at long range.

The MP5's recoil profile is 70 upwards and to the left, 80 to the right, and 30 downwards; recoil kicks up fairly strongly and to the right. This is offset somewhat by its high center speed of 1700. Hip fire is a valid tactic as the high damage offsets the relatively low rate of fire. Reload speeds, empty or not, are some of the fastest in the submachine gun class. As with most submachine guns, wall penetration power is very low.

The MP5 has a moderate rate of fire for the submachine gun class at 800 RPM. This rate of fire can be increased with Double Tap at 1064 RPM. This comes at a heavy price, however, due to the increased ammo consumption and recoil.

The MP5 has average handling statics for the SMG category. Its ADS time is identical to the other submachine guns at 200 milliseconds.The MP5 also moves at a base 100% movement speed as the other SMGs.

Carrying the M9 as a sidearm while using the MP5 adds extra ammunition to the reserve ammunition for both weapons, somewhat negating the need for Bandolier, because they share the same ammo pool. The Mini-Uzi also shares the same ammo pool as the MP5. However, as the weapon is common, ammunition is easily picked up. This weapon is usually better in close range combat, as its recoil can throw off one's aim at longer ranges. This, combined with its low damage at range, means that it is often futile to try and kill someone outside of medium range.

The MP5 has a very fast raise time after sprinting, and the character's arms move faster when sprinting, unlike any other weapon.

The MP5 appears in Old School Mode with 30 rounds in the magazine and 60 rounds of reserve ammunition.

The MP5 in first-person.

A SAS operator holds a MP5SD 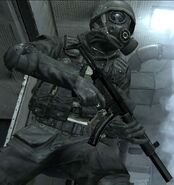 Another SAS operator with an MP5SD.

The MP5 in third-person.
Add a photo to this gallery

The MP5 in first-person.

The MP5's model.
Add a photo to this gallery

In Call of Duty 4: Modern Warfare (Nintendo DS), the MP5 is very different compared to the console and PC version. It takes the appearance of its silenced variant, but this is only cosmetic.

The MP5 is the starting weapon for every SAS mission, excluding "The Russian". It has a very high rate of fire, similar to those of the MAC-10 and Mini-Uzi. Game files refer to it as the "MP5 SD"

The MP5 returns in Call of Duty: Modern Warfare: Mobilized, remodeled, to resemble the one from Call of Duty 4: Modern Warfare more. The MP5 is the starting weapon in "Training", "Distant Information", "Wrecking Crew", and "Interception". Despite the same appearance as its console, and PC counterpart, it has a higher rate of fire, more damage, and only holds up to 120 rounds of reserve ammunition.

In multiplayer, it is unlocked by default as well, but its hipfire accuracy is worse than the MP5 in Call of Duty 4: Modern Warfare (Nintendo DS) and on the console, and PC version, except while crouching, where its hipfire accuracy is perfect. Its magazine holds 30 rounds but the high rate of fire and slow reload make this weapon inferior to the more powerful weapons like the M4A1 or the P90.

First person view of the MP5.
Add a photo to this gallery

The MP5 does not appear in Call of Duty: Modern Warfare 2, however a code remains for it (mp5). It is most likely replaced with the MP5K. Using a console command "give mp5" will give the player an MP5K instead. Also, two HUD icons can be found in game files.

It appears briefly in the cutscene of S.S.D.D. along with the W1200.

The MP5 cannot be obtained via normal means both in Single Player and Multiplayer in Call of Duty: Black Ops. The MP5 model is present in the game to serve as a placeholder for testing purpose whilst the raw files have not been removed from the games. Items such as textures, mesh, limited sound effects and animation are still present, mirroring almost exactly as its Call of Duty 4: Modern Warfare counterpart with the difference being the in-game statistics mirroring that of the MP5K obtainable by normal means in the game.

The weapon is only obtainable via a combination of file force-loading and developer consoles commands. The HUD icon also reuses the icon of the common MP5K in-game. Reload time and firing sound effects are identical to the MP5K however, the cocking ammunition after a dry reload produces no sound.

MP5 in-game.
Add a photo to this gallery

The MP5 is used by Roba's men to kill some Americans at Coahuila, Mexico.

The MP5 being used by one of Roba's men.
Add a photo to this gallery

Several MP5s are seen in a weapons cache during Soap's briefing with Shepherd.

MP5 submachine guns behind Shepherd.
Add a photo to this gallery

"The MP5 kicks hard and dishes out heavy damage. Stats are strong all around, without any glaring weaknesses outside of a strong upward pull through sustained fire. Stick to close quarters and fire off the hip when possible. While recoil is jerky, the MP5 is surprisingly accurate."
— Call of Duty: Elite description

The MP5 is available from the start in multiplayer. The gun features a 30-round magazine, the smallest out of all submachine guns, and high recoil that is quite unpredictable. Compared to the other submachine guns, the MP5 has few merits - the P90 does exactly the same damage with a larger magazine. The MP7 also has a larger magazine, the same fire rate and less recoil. In practice, however, these shortcomings will generally go unnoticed. The MP5 can be a solid choice before these weapons are unlocked as its stats compare more favorably against the PP90M1 and the UMP45, which have a faster rate of fire and lower recoil, respectively.

Infinity Ward has released a hotfix that has increased the MP5's fire rate. Prior to the patch, the MP5 was outclassed in every way by the P90. To compensate for this, the MP5 now has a similar fire rate to the MP7, although the recoil is slightly higher. This makes it a much more competitive gun than before, as it shares the same fire rate as the MP7, but it also reloads faster and has the second highest effective range of all submachine guns, just behind the UMP45. It also features the fastest reload speed in the submachine gun category when Reload canceling is factored in.

In the game mode Money in the Denk, the MP5 is seen in the "In" class, where it is equipped with Rapid Fire.

The MP5 is available in Survival Mode by default and costs $2000. The MP5 is also carried by medium troops from wave 4 (wave 1 on tier 3 and 4 maps). When used right, despite the unpredictable recoil, the MP5 can be used as a cheaper assault rifle, especially if equipped with a Holographic or Red Dot Sight, although burst firing will be required for long ranges. The MP5 is also carried by the Riot Shield Squad troops, but will disappear when killed.

First person view of the MP5 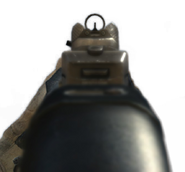 SAS Operator wielding a MP5 with a Silencer

The MP5 in third-person

Reloading the silenced MP5 with a Grip used in Stronghold

The MP5 returns in Call of Duty: Black Ops II in Zombies and the campaign. Its appearance is similar to the MP5 in Call of Duty 4: Modern Warfare, albeit with minor visual changes.

The MP5 appears in Zombies, replacing the MP5K from Call of Duty: Black Ops. It can be bought off the wall for 1000 points. Compared to the MP5K, it has similar damage, ammo capacity, and overall effectiveness. When Pack-a-Punched, it becomes the MP115 Kollider. The MP5 cannot be Pack-a-Punched more than once, but ammo can be bought off the wall, making it a decent alternative to the weapons from Mystery Box. 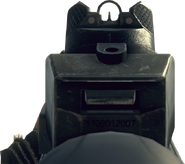 The MP5 in third person.

MP115 Kollider.
Add a photo to this gallery

The MP5 is featured in Call of Duty Online as the SMG5SD with an integrated silencer. It appears alongside the unsilenced SMG5 compact variant.

The SMG5SD in first person.

Reloading the SMG5SD
Add a photo to this gallery

kill 30 enemies with an SMG while crouching to unlock

The MP5 return in Call of Duty: Mobile where is it called QQ9 and was added a part of the Season 7 Radioactive Agent update.

The QQ9 in first person

Reloading the QQ9
Add a photo to this gallery

The MP5 returns in Call of Duty: Modern Warfare.

The MP5 is available for use in the campaign. Some versions use the same model as the "Strapped" blueprint added to multiplayer post-release. In Proxy War, It can be picked up from dead allies

Retrieved from "https://callofduty.fandom.com/wiki/MP5?oldid=2523696"
Community content is available under CC-BY-SA unless otherwise noted.