Call of Duty Wiki
Register
Don't have an account?
Sign In
Advertisement
in: Call of Duty: Modern Warfare 3 Machine Pistols

For another variant, see TMP.
For a similarly named submachine gun, see PM-9.

The MP9 is a machine pistol featured in Call of Duty: Modern Warfare 3.

It is the second machine pistol unlocked in the game, at level 16.

Damage-wise, the MP9 is bizarre: high in some places, but low in others. It will get a four bodyshot kill before the damage drop-off, but will steep off to a six-shot kill for minimum damage. The headshot multiplier is exceptionally large, dealing double the damage per headshot. This can make the headshot damage between a two headshot kill to a three headshot kill if the player can get consistent headshots. The MP9 also has a high rate of fire, but in terms of a Machine Pistol, it is the second worst in the category behind the Skorpion, shooting at 895 RPM. The MP9 also has poor penetration abilities.

In terms of accuracy, the MP9 is surprisingly accurate for a Machine Pistol. The recoil is somewhat moderate, and the iron sights are clean.

Handling traits of the MP9 are favorable. The reload time is a nice 2.1 seconds, but increases to almost three seconds when empty reloading. The hip-fire spread is good, and the raise and drop times are nothing special. The MP9 has a very large magazine at 32 rounds, and has four magazines in total upon spawning.

The big strength of the MP9 is its versatility.  It is similar to a Submachine Gun in terms of capacity and recoil, but retains a good rate of fire. The weapon is also extremely rewarding towards accurate players that can score headshots.

In terms of attachments, they are limited, with only the Silencer, Akimbo, the Red Dot Sight, the Holographic Sight, and Extended Mags being available. The iron sights negate the need for an optical attachment, which leaves the Silencer, Akimbo, and Extended Mags being of interest. The Silencer makes the MP9 a nice silent weapon if the player desires a silent loadout alongside Assassin Pro and a silenced Primary weapon. Akimbo makes the MP9 one of the most powerful close quarters weapons without sacrificing much accuracy up close, but a lot at medium range. Finally, Extended Mags allows the player to hold 48 rounds in their four magazines instead of 32, increasing overall supply and reducing the need to reload; Extended Mags would be the most versatile option, but Silencer or Akimbo can be used for the appropriate situation.

Much like the USAS 12 and Skorpion, the MP9 increases sprint time by approximately 75%. When combined with Extreme Conditioning, the player can abuse this mobility to increase his stamina by almost 3.5x.

In conclusion, the MP9 is a dependable weapon that can easily help out a player when they need it, and definitely proves its worth as a Machine Pistol. It is highly recommended due to how well it works with attachments. It is an excellent choice if the player is not using Scavenger, as it can serve as an effective all-around backup weapon if the player runs out of primary ammunition. 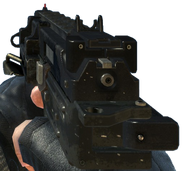 The MP9 in first-person view. 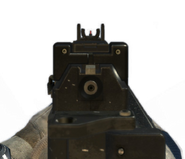 Aiming the down the sights. 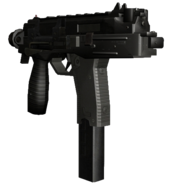 The MP9 in third person. 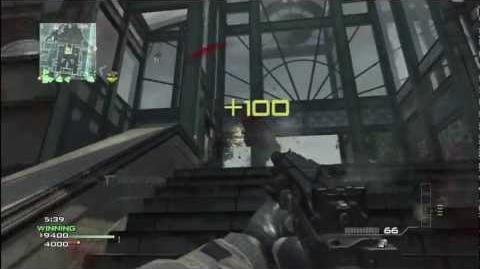 Call of Duty Modern Warfare 3 MP9 Suppressed
Gameplay of the MP9 with a silencer.