"Automatic carbine designed to fire pistol cartridges... genius!"
— Robert McNamara, after buying the MPL off the wall in "Five".

The MPL is a submachine gun which appears in the Multiplayer and Zombies modes of Call of Duty: Black Ops.

The MPL is available for purchase at Level 35.

The MPL is a low damage SMG. At any range short of twenty meters, the MPL will do thirty damage per bullet, taking 4 body shots to kill. Damage decreases linearly until 25 meters, where the MPL will deal twenty damage, taking five shots to kill. Headshots will usually reduce the number of shots to kill by one. The MPL is a one shot kill in Hardcore out to twenty meters. The MPL also has low penetration power. As a result, the MPL is not geared towards shooting through cover at all. It will kill enemies very inefficiently through cover, if at all, and Hardened will be needed to have a meaningful chance of shooting through walls.

The MPL's rate of fire is fast, at 937 RPM. This counterbalances the low damage per bullet.

The MPL's accuracy is decent. The iron sights are of an unusual shape. They take some getting used to, but are manageable. The recoil per shot is somewhat large for an SMG, as the MPL has notable kick going side to side, especially to the right. Only the MP5K and the Uzi have larger recoil per shot among SMGs. Thankfully, the MPL's centerspeed is very high, at 1700. This makes the MPL quick to recover from the recoil per shot.

The MPL has below average handling characteristics for an SMG. Most notably, the MPL has a slow aim down sight time among SMGs, taking 250 milliseconds to aim instead of the usual 200 milliseconds. The hip-fire spread is tight, the MPL allows the user to move at 100% of the base speed, and the switch speeds are average. The MPL's reload speed is also average, taking 2.25 seconds to perform a partial reload, 3 seconds for an empty reload, and 1.75 seconds to perform a Reload Cancel.

The MPL has an odd assortment of attachments. Extended Mags is not available, but Dual Mags is available to compensate.

Dual Mags is easily the MPL's best attachment on offer. Not only is it semi-unique to the MPL among SMGs, but it really helps the MPL overall. It makes every other reload quicker, and increases the starting ammo loadout to 192 rounds. This attachment makes Scavenger almost completely unneeded. A lot of the SMGs need or like to have Scvenger as the blue perk. Using Dual Mags with the MPL allows users to never have to worry about using Scavenger. Dual Mags also lowers the need for Sleight of Hand, another perk that many SMGs must resort to. In terms of building an SMG class, putting Dual Mags on the MPL opens up a world of opportunities.

The ACOG Scope is a horrible attachment on all the SMGs, and the MPL is no exception. The aim down sight time is significantly slower at 350 milliseconds, and the centerspeed is drastically lowered to 1300. Avoid this attachment at all costs.

The Grip increases the MPL's centerspeed from 1700 to 1800. The increased centerspeed can be nice on a weapon with higher than average recoil per shot.

The Suppressor is a great fit on the MPL, as the MPL fires quickly, has minor damage differential, and has a large magazine capacity to begin with.

Rapid Fire increases the rate of fire on the MPL from 937 RPM to 1250 RPM. This makes the MPL much more dangerous overall, but it also makes the MPL quite inaccurate. It is also incompatible with Dual Mags. This is a very annoying attribute, as Dual Mags is by far the most appealing advantage that the MPL has over other SMGs.

The MPL is extremely similar to the Spectre. Both weapons have the same damage profile, rate of fire, reload speed, and centerspeed, while both have iron sights that aren't too popular. Compared to the Spectre, the MPL has a slightly larger starting ammo loadout and access to Dual Mags. The Spectre, on the other hand, has access to Extended Mags, aims down the sight more quickly, and has less recoil per shot. One should try to use both the MPL and the Spectre to see which one suits them better, as the two of them are very similar and provide key benefits over the other.

The MPL is available in the Zombies maps Kino der Toten, Five, Ascension, Call of the Dead, Shangri-La, and Moon for 1000 points off the wall. It is a well rounded weapon as far as headshots, due to its low recoil, but deals sub-par damage. In the early rounds, it can be a very effective in earning points. It is an average choice for window guarding and standing ground when one wishes to fight using a submachine gun. Although it is very effective in killing zombies, with a moderately high rate of fire and accuracy, a quality reload, fast knife speed, and fast mobility while aiming, its low ammo capacity becomes a noticeable problem, especially when using Double Tap Root Beer. It is best to find an alternative weapon by this point if one is too far to purchase more ammo.

When Pack-a-Punched, it becomes the MPL-LF, a pun on Maple Leaf (MPL=Maple, LF=Leaf). It gains a 40-round magazine, a Red Dot Sight with a random reticle, and deals more damage (one-hit-headshot capability until round 8+). It possesses a satisfying killing ability until round 15, however, it is incredibly hindered by a low damage per bullet and ammo reserve, making this a questionable choice for a primary weapon. However, it works great as an alternative weapon to heavier weapons (unless the players are using Stamin-Up), as it retains its high mobility, allowing for greater flexibility when navigating around the map.

Diving with the MPL

Render of the MPL's model

ELITE Render of the MPL

The MPL in Call of Duty: Black Ops Zombies

The MPL-LF in Call of Duty: Black Ops Zombies 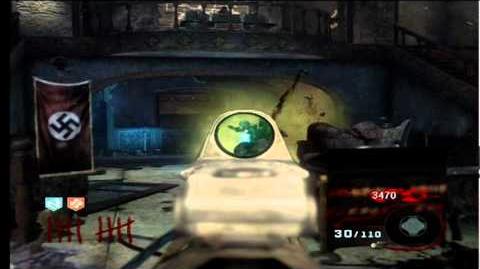