Call of Duty Wiki
Register
Don't have an account?
Sign In
Advertisement
in: Call of Duty: Black Ops II Helicopters

The MQ Drone is a unmanned aerial drone featured in Call of Duty: Black Ops II.

It is found in two missions, in the mission "Celerium", an MQ Drone can be hacked by the player if the Access Kit is equipped and the 40mm minigun can be used against the enemies. A Drone next to the other MQ Drone was about to lift off but was destroyed by Section or Salazar. The MQ Drone plays a bigger role in mission the "Fallen Angel" where the drones act like death squads and execute looters during the flooding and also protects the compound at the end of the mission and the player can control it at the end of the level. It uses Miniguns and rockets that can lock onto enemy vehicles. A challenge that is associated with this vehicle is to destroy 20 vehicles with the drone missiles.

MQ Drones can easily be destroyed by heavy weapons such as the Death Machine, but are mostly immune to regular weapons.

The MQ Drone appears in multiplayer when the player calls in a Care Package or an A.G.R..

A decorative MQ Drone can be purchased for 200

. Afterwards, it will fly around the base.

Section and Harper hiding from the searching drones. 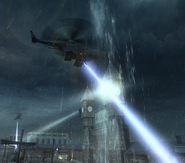