Call of Duty Wiki
Register
Don't have an account?
Sign In
Advertisement
in: Call of Duty: Ghosts Marksman Rifles
English

The MR-28, referred to within game files as the G-28, is a marksman rifle that appears in Call of Duty: Ghosts. It has a built-in Foregrip.

The MR-28 is Logan's starting weapon in the mission "All or Nothing", equipped with an ACOG Scope.

The MR-28 is available in Multiplayer as a Marksman Rifle. It's automatically included in the original Sniper class, and also possesses the lowest cost of all of the Marksman Rifles, at a tiny 6 points (about the same price as a Tracker Sight, for comparison). The MR-28 has the highest firecap of all of the Marksman Rifles, and as well, possesses little recoil due to the integrated Foregrip. The MR-28 possesses the shortest range of all the marksman rifles, which can mitigated with a Muzzle Brake. The iron sights are very clear on the MR-28, and thanks to the lower recoil, the sniper scope is good to use as well. However, high-powered opticals such as a Tracker Sight or a Thermal Hybrid can still be used effectively on this weapon. The MR-28 has the largest magazine size in its class, so Extended Mags aren't as large of a necessity, but can still be used to upgrade the size to a massive 36 rounds. The Armor-Piercing attachment can prove quite useful, should the player encounter armored enemies, and if the player chooses the Sniper Class default when making a soldier, it automatically is unlocked. Burst Fire is useful on this weapon due to the high rate of fire compared to other marksman rifles. The rate of fire within the burst is, in fact, comparable to most fully-automatic assault rifles, which, when combined with its 2-3 shot kill ability, can be competitive in all ranges.

Due to the MR-28's great accuracy, Focus can be an amazing perk, as a large flinch during a long-range gunfight can be detrimental. Sleight of Hand can be used to improve the moderate reload time it has, although this reload time is fast compared to other Marksman Rifles. Should a player be not moving around a lot, the Fully Loaded perk can prove useful, as the MR-28 goes through ammo faster than any other gun, despite the magazine's size. If the player will move around a lot, though, then they should choose Scavenger over Fully Loaded.

Like other Marksman Rifles, the MR-28 has 15% less recoil when using the default scope. Combined with the weapon's already low recoil this makes for very accurate shooting at all ranges which compensates for its lower range.

In general, the MR-28 is a solid weapon that is very versatile. It can meet the fancy of a lot of players with relative ease, and it is fairly easy to use.

The MR-28 appears in Extinction, in Point of Contact and Nightfall. It costs $2000 to buy. In Point of Contact, it is located on a rock in the field near the lookout tower with the turret. In Nightfall, it is found on a small bridge when entering the weapon facility. It was also in Mayday inside one of the side doors, which was later removed and replaced by the VKS.

The MR-28 is perhaps the weapon that plays the most differently from Multiplayer. In Extinction, it has eight round magazines, a far stricter firecap, and incredible per-shot damage. It is one of the most powerful per-shot weapons in the game mode. Under the right circumstances, the MR-28 can deal a one shot kill to something as big as a Hunter or Scorpion, power that only shotguns and sniper rifles can match, which are far less versatile than the MR-28.

The MR-28 does not have great sustained fire capabilities thanks to its very restrictive eight round magazine. For how small the magazine is, players can get good mileage out of a single magazine due to the weapon's raw power and extremely low firecap making players shoot very slowly. The poor handling characteristics also make the weapon extremely inconvenient for those that aren't using Weapon Specialist. Most of the MR-28's handling problems are fixed by a Weapon Specialist, and in addition to that, a Weapon Specialist can squeak even more power out of an already powerful gun. For those with Master Scavenger, Extended Mags can be of great assistance to the MR-28.

Burst Fire changes the MR-28 considerably. It increases the magazine capacity itself to twelve rounds while making the MR-28 a slow two round burst weapon, giving six bursts per magazine by default. The radical difference it has from the base version make this attachment of very questionable merit, especially to those who are content with the base MR-28.

Overall, the MR-28 is an extremely polarizing weapon with extreme strength weighed down by severe weaknesses. Players that can mitigate the MR-28's handling woes may find it to be a lucrative weapon that can kill big game Crytpids in very short order. Others may detest its short magazines, bad handling, and extremely restrictive firecap that is more in line with a Sniper Rifle.

It is overall a poor weapon to use in Chaos Mode due to the mode's faster pace compared to Extinction. Its low rate of fire can be bad when the timer has run out and the player must keep their multiplier up. Its magazine size is also relatively low for the mode, and if the player has not yet received Sleight of Hand, it can be problematic because the player will have to reload often. Its damage is high, which is usually a good thing, but in Chaos Mode it can actually be a bad thing because the player must rely on damaging enemies in order to keep their multiplier up, so killing enemies faster with this high damage means less enemies for the player to use to keep their multiplier up. Overall, its strongest advantages are its very low recoil and its long range, which can be helpful for taking down Cryptids that are far away. However, at the same time, the front notch on its iron sights can be tough to see, which can somewhat hinder its long-range capabilities. 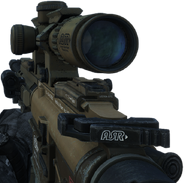 The MR-28 in first-person view. 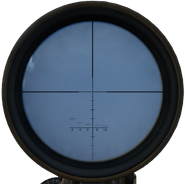 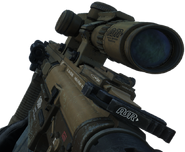 The MR-28 with Iron Sights.