The MR6 is a pistol featured in Call of Duty: Black Ops III.

The MR6 appears as the recommended sidearm for the Player, and is seen being used most friendly factions in the campaign. The sidearm is holstered by soldiers, used when their main weapon runs out of ammo.

The MR6 has significance in killing characters, such as Dr. Salim in "Demon Within", John Taylor in "Lotus Towers", and Sebastian Krueger, Jacob Hendricks and the Player themselves in "Life".

The MR6 is unlocked by default.

The MR6 is a very high damage per bullet pistol. At ranges shorter than 19 meters, the MR6 will deal 42 damage, resulting in a three shot kill. Between 19 and 38 meters, the MR6 will deal 29 damage, taking four shots to kill, or two shots in Hardcore/one headshot. Past 38 meters, the MR6 will deal 22 damage, needing five shots to kill, and guaranteed two shots in Hardcore. Headshots are not beneficial on this weapon whatsoever without the High Caliber attachment. In sharp contrast to its good damage per bullet, the MR6 has poor wall penetration power. The player will need FMJ to shoot through the majority of walls and obstacles that aren't glass nor plywood. The MR6's key strength over the RK5 and the L-CAR 9 lies in this great damage and range, making it by far the best sidearm for a medium range engagement.

The MR6's accuracy is also strong for a pistol. Its iron sights are extremely simple and clean, and the recoil is low and predictable, kicking uniquely upwards with every shot. Accuracy is something the MR6 will have plenty of.

The MR6's handling characteristics are superb, but in terms of pistols, the MR6 is just below average. The MR6's aim down sight time is fast, the MR6 will allow the player to move at 100% of the base speed, and the MR6's hip-fire spread is a decent size. The MR6 reloads slowly, taking at least 1.9 seconds to reload. This is the slowest reload time of the pistols, meaning that the player will need to manage their reload with the MR6 more than with the other pistols.

The MR6 also has a strong magazine capacity, holding 20 rounds by default. This magazine is both large and put to great use, as the MR6, if being used as a Secondary weapon, gels well with a class without Scavenger, something that the RK5 and the L-CAR 9 struggle to do with their higher rates of fire.

The MR6 gets the usual attachment selection of a pistol. The optical attachments are useless, as they aren't much clearer than the iron sights, and if anything, magnify the visual recoil of the MR6.

The Quickdraw Handle is a good fit for the MR6, as it allows the pistol to be aimed lightning fast. Due to how fast the MR6 can be switched to, aimed, and commence firing, it becomes a great fallback weapon for someone using a slow-firing sniper or shotgun.

The Suppressor, contrarily to popular belief, doesn't have a huge range reduction on the MR6. Range values will be reduced by 30%, making the three shot kill range extend out to about 13 meters, and the four shot kill range extend to about 26 meters. Adding a Suppressor onto the MR6 makes it compliment extremely well a primary weapon with a Suppressor equipped as well, since it won't reveal the player on radar when they need to use the MR6.

High Caliber is extremely powerful on the MR6, as the headshot multiplier is increased to 1.5x instead of 1.1x, making headshots extremely rewarding and making the MR6 kill extremely quickly. High Caliber is a great attachment to use if using the MR6 either as a primary or if the player relies on their MR6 for all close quarter gunfights.

The Laser Sight is a powerful attachment on the MR6, tightening its hip-fire spread significantly. This makes the MR6 even more reliable in close quarters, which can help it have an edge over the RK5 or the L-CAR 9. The only weapons with better hip-fire spread with a laser sight are the SMG's, where some may consider it overkill.

FMJ improves the MR6's poor penetration power and power against scorestreaks. FMJ is an ill fit for the MR6, as the pistols in general are not well suited to shooting through walls due to their low magazine capacities and bullet damage.

Fast Mag improves the MR6's reload time, speeding it up to about 0.9 seconds. This makes the MR6 reload extremely fast, but not faster than the RK5 or the L-CAR 9 with the attachment equipped. Still, Fast Mag is a great option for the MR6. Extended Mag isn't exactly necessary on the MR6 due to its already luxurious 20 round magazine, leaving reloads less frequent, and ammunition in a quieter demand.

Long Barrel is a weak attachment. Its effect is small, and the MR6 has no shortage of range already.

Dual Wield allows the player to hip-fire two weapons, at the expenses of the ability to aim and the extra need of ammunition due to two weapons eating at the ammunition reserve. This attachment makes the MR6 deadly in close quarters, and allows the pistols to be quite strong out to a decent distance, as their hip-fire box isn't noticeably increased unlike the RK5. Although it's an odd fit for the MR6, it is still a powerful attachment worth trying out.

The MR6 is the starting pistol for the Zombies maps The Giant, Der Eisendrache, Zetsubou No Shima, Gorod Krovi, Revelations. Before a patch update, it was the starting pistol on the remastered versions of Nacht der Untoten, Verrückt, Shi No Numa, Kino der Toten, Ascension, Shangri-La, and Moon, before it was replaced by the 1911. It first appeared in The Giant's trailer, with young Tank Dempsey and Takeo Masaki pointing the gun at Richtofen. The younger version of Richtofen uses the pistol to kill his older self by shooting him in the head. This version of the MR6 has an eight round magazine instead of the usual twenty. It is very comparable to the M1911 from the Call of Duty: Black Ops Zombies maps, having very similar damage, rate of fire, recoil patterns, and reload speeds.

When upgraded via the Pack-a-Punch Machine, it becomes the Death and Taxes, which plays a similar role to the Mustang and Sally and the Meat Wagon from previous maps as a dual-wielded pistol that fires grenades. It should be noted, as with the Bloodhound, that the grenades fired by the Death and Taxes have high splash damage against the player. As most zombies maps are somewhat close-quarters, the Danger Closest GobbleGum is recommended if one plans to use this weapon in the long run. However, the ammo consumption of this weapon is rather alarming, so it would be wise to make the shots count.

Strangely, the MR6 weapon level can be increased and attachments can be unlocked if the player has reached Prestige Master in Zombies, but it cannot be customized.[1] 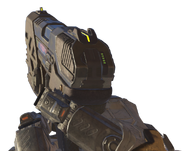 The MR6 in first person

The MR6 being fired in third-person.