The MSBS is available in Multiplayer as the only default burst fire assault rifle available. It costs a moderately high 8 Squad Points to unlock.

The MSBS is a highly variable damage, moderately ranged weapon. At any range short of sixteen meters, the MSBS will deal 55 damage, taking two hits to kill. Damage linearly decreases until 46 meters, where the MSBS will deal twenty damage, taking five hits to kill. Unlike other weapons in Call of Duty: Ghosts, the MSBS deals less damage when hitting the limbs. In burst fire mode, hitting the arms, hands, shins, or feet will deal only eighty percent of the normal damage per bullet. In fully automatic mode, the MSBS will deal only ninety percent of normal damage to all parts of the body except the head. The semi-automatic MSBS does not have reduced multipliers, and the MSBS in all configurations does forty percent extra damage per headshot. Damage per bullet will vary wildly depending on the range and what part of the body the player is striking the opponent. The MSBS' two hit kill is devastatingly fast.

The MSBS' rate of fire is moderately fast. It has the fastest burst fire rate of all assault rifles, at 491 RPM total, while firing at 895 RPM within the bursts. The MSBS' fire rate in Automatic Fire will equate to 800 RPM, the third fastest fully automatic fire rate in class. For all intents and purposes, the MSBS essentially has integrated Burst Fire equipped, allowing all kills with the regular MSBS to count towards burst fire operations and patches.

The MSBS' accuracy is abysmal. The iron sights are quite bulky, obstructing a good portion of view, and the recoil per shot is awkward, as the MSBS has no negative vertical recoil value, so the weapon won't compensate for its own vertical recoil, unlike most weapons in Call of Duty. The horizontal recoil is self-centering, and both values are very small, so horizontal recoil isn't very problematic. The centerspeed is also unusually and terribly low, at a meagre 1000 in all fire modes. Firing fully automatically will cause the weapon to struggle to stay on target, as the weapon will constantly kick upwards and recover at an abysmally slow rate. The MSBS has the lowest idle sway amount of all assault rifles, at more than half the average idle sway amount.

The MSBS' handling characteristics are standard for the tier. The hip-fire spread is an average size, the movement speed is average at ninety percent, the strafe speed is abysmal at 36 percent, and the aim down sight is the average 300 millisecond aim speed.

The MSBS' magazine capacity is average, at thirty rounds, or ten bursts. The MSBS will spawn in with ninety rounds total. Running out of ammo isn't as big of a concern on the MSBS compared to the other assault rifles, as it can be very ammo conservative.

The MSBS has the usual assortment of attachments on offer, barring the replacement of Burst Fire by Automatic Fire.

The optical attachments are very popular choices on the MSBS due to the very bulky iron sights.

The underbarrel attachments are all present. The Foregrip surprisingly doesn't help the MSBS all that much, as all four of its recoil values are small, making the Foregrip's effect also small. The Grenade Launcher foregoes the lethal slot in place of two grenades. These grenades are quite effective compared to other games, and with Danger Close, the Grenade Launcher becomes an extremely potent weapon. The Shotgun provides the user with a four round capacity shotgun with limited power. Compared to other shotguns, it is quite poor, statistically being an almost complete downgrade to the Bulldog on all facets apart from being able to be fired near instantly.

The barrel attachments are all available. The Flash Suppressor will reduce muzzle flash, making it easier to see the intended target. Its effect is quite limited. The Silencer has the effect of the Flash Suppressor alongside quieter shots and the weapon not showing the user on radar while firing, but at the expense of a quarter of the MSBS' range. Due to the MSBS being particularly reliant on killing in two or three shots in tandem with the burst delay, this attachment is not well suited to the MSBS. The Muzzle Brake is a very potent attachment, boosting range by twenty percent. Due to the MSBS' reliance on killing in as few shots as possible, this attachment is extremely effective on the MSBS.

The modification attachments are also present. Extended Mags will boost the MSBS' magazine capacity to 45 rounds and boost its starting ammo loadout by fifty percent. Armor-Piercing ignores the enemies' health benefit if they are wearing Ballistic Vests, and severely reduces the amount of shots needed to kill someone wearing a Juggernaut Suit. Semi-Automatic will make the MSBS fire semi-automatically. This will remove most of the negative body multipliers the MSBS has, allowing it to rake in multiple two hit kills. It has the benefit of being one of the only assault rifles to be able to get a two shot kill before damage multipliers in semi-automatic mode (the other being the Maverick, which has a short two hit kill range), making the MSBS a very reliable weapon as far as two hit kills are concerned. Automatic Fire will make the MSBS fire fully automatically at 800 RPM, but the two shot kill is almost completely removed thanks to a 0.9x damage multiplier to everywhere but the opponents' head. It also causes the MSBS to be very difficult to control as far as accuracy is concerned thanks to the dreadful 1000 centerspeed.

The MSBS in first-person view 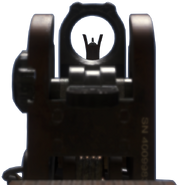 Reloading the MSBS equipped with the Tracker Sight and Shotgun attachment

Pick-up icon of the MSBS Custom