Automatic (3-round burst with Select Fire)

The MSMC has the highest damage at close range in its class. It takes four shots to kill out to medium range. The MSMC, being a medium capacity, high damage and ranged submachine gun, is most comparable to the PDW-57, which handles similarly. The Laser Sight is a very effective attachment, boosting the already decent hip fire performance. Fast Mag or Extended Clip can help with the sluggish reload time or lessen the need for reloads. As well, well-timed Reload Cancels can make the reload times a lot faster. However, the Extended Mags attachment can come into conflict with reload canceling. At close ranges, it is outperformed in terms of rate of fire by the other faster firing submachine guns in its class such as the Vector K10, but has higher range and somewhat lower recoil, making it more effective in medium range engagements than its competitors. Movement speed is increased by 1.25% when holding the MSMC as well as by 4% over normal ADS move speed when aiming down sights.

Players should avoid long range combat where Assault Rifles, Light Machine Guns and Sniper Rifles dominate, but if one wishes to do so, burst-firing is recommended to compensate for the damage drop-off and recoil. If the player is good at burst-firing, Select Fire can be useful as it takes advantage of the gun's fast re-center speed. The suppressor provides a near elimination of the muzzle flash and keeps the player off the radar when firing, however given the slow rate of fire of the MSMC the suppressor is not as viable as it is on most other SMGs, and the 30% reduction in range is quite a heavy blow considering that range is a main advantage of using the MSMC in the first place. Conversely, Long Barrel can provide a huge asset for the MSMC's second longest in-class range, however, players might find it unnecessary and might save an attachment slot to keep the already decent range as-is.

Overall, the MSMC is one of the most popular weapons in the game due to its high damage and range.

March 12, 2013's patch increased the recoil of the MSMC and also increased its hip fire spread slightly. The same occurred with the PDW-57.

The MSMC is the sixth weapon tier in Gun Game, where it is equipped with the Foregrip attachment.

The MSMC returns in Call of Duty: Black Ops III as the XMC. It is available for use in Multiplayer via Supply Drops as of the August 15, 2017 update.

The XMC is an average damage SMG, dealing a 40-19 damage, ranging from a three-to-six bullet kill. This is decent, especially considering this is an SMG. The fire rate is good, at 800 RPM, being bested by the VMP and the Vesper. Combined, the MSMC is a good mix of the VMP and the Kuda. The redeeming factor of the XMC is the low recoil and the time to kill. This gun has very low recoil, almost to the point where it is usable at long range, where SMGs usually struggle. The time to kill is much better than the VMP, even though the VMP has a superior fire rate. Overall, the XMC is a well-rounded SMG, with low recoil, decent damage, a good fire rate, and a good time to kill, and is even comparable to assault rifles with good damage like the KN-44 and the M16.

The XMC in first person 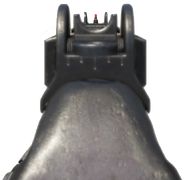 The MSMC returns in Call of Duty: Mobile.

Its high point is its fast fire rate (second highest fire rate of all guns in the game, only beaten by the Fennec) and high mobility, but with that it has rather heavy vertical and horizontal recoil pattern. With recent buffs, the MSMC can kill very fast at close range, being able to outgun most of the guns in its class. However, the gun suffers the lack of range, and the problematic recoil pattern it has.

The gun was available in Battle Royale, but was removed in Season 9. It has high rate of fire but suffers the lack of long range damage and heavy recoil patterns. It can still become available as customized blueprints.