For other variants, see TAR-21 and MTAR-X.

The MTAR is a bullpup assault rifle featured in Call of Duty: Black Ops II and Call of Duty Online.

The MTAR is part of the recommended loadout and also used by the ISI in "Fallen Angel" with a MMS. DeFalco uses one in "Karma" if the player catches up to him, trying to rescue Chloe Lynch. It can also be found on Mercs in the same level, sporting various attachments.

The MTAR is the first assault rifle to be unlocked at level 4.

The MTAR is a moderate damage, moderate-range assault rifle. At any range short of sixteen meters, the MTAR will deal forty damage per bullet, needing three shots to kill. At any range between sixteen meters and 37.5 meters, the MTAR will deal thirty damage per bullet, needing four shots to kill. At any range past 37.5 meters, the MTAR will deal 24 damage per bullet, needing five shots to kill, or two shots in Hardcore game types. The MTAR deals twenty percent extra damage on a headshot, reducing the amount of shots needed to kill only beyond sixteen meters. The MTAR has medium penetration power, allowing it to retain some damage when shooting through objects. The MTAR is ill-suited for long range combat with its poor long range damage.

The MTAR's rate of fire is moderately high, firing at 750 RPM. Among assault rifles, only the M8A1, Type 25, and the SWAT-556 with Select Fire can best this fire rate among assault rifles on a consistent basis. The MTAR combines a fair three shot kill range with a fair rate of fire, combining to make a very competent assault rifle in CQC.

The MTAR's accuracy is fair. The iron sights are simple and clear, with the point of aim being clearly indicated with red illumination on the front sight. The MTAR's recoil per shot is moderate as well, with recoil values of 55 upwards, 45 to each side, and 25 downwards. The MTAR will pull upwards with moderate shaking from side to side. The MTAR has a decent centerspeed of 1500. The MTAR is one of the easier assault rifles to control with fully automatic fire.

The MTAR's handling characteristics are standard for an assault rifle. The MTAR allows users to move at 95% of the base movement speed, but strafe at only forty percent of the base movement speed. The MTAR has moderately sized hip-fire spread, and the MTAR allows users to aim down the sight in 250 milliseconds. The MTAR's reload speeds are average for an assault rifle, but decently fast overall. The MTAR's reload animation is 2.5 seconds long, or 2.9 seconds long if the magazine is completely empty. In either case, the MTAR has a Reload Cancel speed of 1.5 seconds.

The MTAR has the standard assault rifle magazine capacity and starting ammo loadout, at thirty rounds and 120 rounds respectively.

The MTAR has the standard assortment of assault rifle attachments available.

The EOTech Sight and the ACOG Sight both provide higher magnification options for the MTAR that both provide a very slight centerspeed increase, assisting with target acquisition at longer ranged combat. Long ranged combat is the MTAR's biggest weakness as a weapon, so using either of these attachments doesn't play into the MTAR's strengths very well.

The Target Finder provides a longer-ranged sight option that illuminates targets without Cold-Blooded in a red diamond overlay. The Target Finder is better used at long range, where the MTAR proves weak at, and it'll also block peripheral vision.

The Foregrip provides a very small centerspeed increase. Although the attachment is purely beneficial, the benefit is so slight that it is a waste of a Pick Ten slot.

The Quickdraw Handle will quicken the MTAR's aim down sight time to 150 milliseconds. The MTAR will be able to snap onto target much more quickly as a result. The attachment is purely beneficial and the user can't go wrong with selecting this attachment.

The Adjustable Stock will allow the user to strafe at 88% of the base movement speed, only slightly slower than the MTAR's basic move speed. This allows the user to strafe at more than double the speed of normal and maintain mobility while keeping the sights raised. Although the attachment is purely beneficial, the utility of the attachment is largely determined by the user's playstyle, as the change is significant enough to potentially disorient users that aren't used to the significantly improved mobility.

The Laser Sight makes the MTAR's hip-fire spread 37.5% tighter overall, making the MTAR's hip-fire much more accurate overall. The MTAR is one of the better assault rifles in close to medium range combat, so the MTAR can abuse the improved hip-fire accuracy quite well.

The Suppressor will prevent the MTAR from revealing the player's position on radar while firing, as well as reducing muzzle flash and making the MTAR quieter when firing, but reduces the MTAR's three shot kill and four shot kill ranges. The Suppressor makes it more likely to get a five shot kill, where the MTAR flounders. The MTAR fits a more aggressive and mobile playstyle, which the Suppressor can assist with.

Fast Mag will speed up the MTAR's reload speeds. With Fast Mag, the reload animation is only 1.6 seconds long, or 2 seconds long if the magazine was empty. In either case, the MTAR with Fast Mag can be reload cancelled in 0.8 seconds. Fast Mag makes the reloads very fast, but the MTAR's reload speeds are already solid. The attachment provides a notable benefit but is by no means necessary.

FMJ improves the MTAR's penetration power, allowing it to shoot through cover while retaining more damage than usual, while also increasing damage dealt to enemy pointstreaks. The attachment is purely beneficial in its effect.

Overall, the MTAR is a well-balanced weapon overall that excels at medium range combat with more of an emphasis on closer ranges. Within the MTAR's three shot kill range, it is quite effective. Whenever the MTAR is netting four shot kills, the MTAR's effectiveness will dip but the MTAR will remain effective thanks to its decent accuracy and rate of fire. Long range combat should be avoided with the MTAR, as it will suffer from weak bullets and be less capable of putting its fire rate to good use.

As of the January 26, 2013 patch, the MTAR's three-hit-kill range has been increased to 16.5 meters. This increases the range to beyond even that of the MSMC, and with the same rate of fire, making the MTAR a worthy alternative to the MSMC for the niche that it occupies.

"Wow, this is interesting! 5.56mm compact carbine assault rifle with a 380mm barrel!"
— Marlton Johnson, when obtaining the MTAR from the Mystery Box in Die Rise.

The MTAR can be acquired from the Mystery Box for 950 points in Green Run, Nuketown Zombies, Die Rise, Mob of the Dead and Buried. It comes with a 30-round magazine with 240 rounds reserved and has good damage, retaining high headshot damage late into the rounds. Recoil bounces diagonally to the left with continuous fire, making burst firing the MTAR effective for accuracy.

When Pack-a-Punched via the Pack-a-Punch Machine, the MTAR becomes the Malevolent Taxonomic Anodized Redeemer and will have a Reflex Sight, increased damage and reduced spread while aiming down the sights, making it more useful at longer ranges. The hipfire spread is significantly smaller, and recoil is severely reduced, which bolsters this new level of accuracy even further. This accuracy can be somewhat reduced through Double Tap II, but in turn increases the MTAR's bullet damage even further. Like many other 2025 weapons, it can be Pack-a-Punched multiple times for 2000 points. Doing so multiple times cycles different attachments, but in return, removes the previous attachment. Various attachments include the MMS, Target Finder, EOTech sight and the Grenade Launcher.

The MTAR in first person

Third person view of the MTAR equipped with a Target Finder 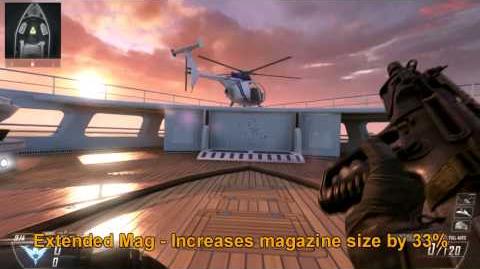 The MTAR returns in Call of Duty Online as the Tavor-21.

The MTAR in first person