"This classic remake is a powerful semi-automatic assault rifle that is devastating at a distance, putting targets down with two shots."
— In-game description.

The MX Garand (known as the M2 Raider in pre-release) is a semi-automatic Assault Rifle featured in Call of Duty: Black Ops III. Only available in multiplayer, it is a Black Market-exclusive weapon that was added to the game on February 8th, 2016.

Designed as a spiritual successor to the M1 Garand, the MX maintains quite a few similarities to the original, including the characteristic eight-round clip size, the familiar "ping" sound when emptied and the high damage. It is very similar to the Sheiva due to its two-three shot kill profile, low firecap and fairly low recoil, but it has a faster fire rate and lower ammo capacity. It should be noted that the MX Garand cannot be reloaded mid-clip, therefore it can only be reloaded once it is empty. It is recommended for the player to make their shots count for this reason. When not in combat and only a couple shots remain in the clip, firing off the remaining shots to refill for the next engagement is a good idea. The MX Garand will deal 60 damage at ranges shorter than 19.05 meters, 56 damage from 19.05 to 51 meters (only affecting High Caliber, making headshots no longer one-shot kill), and 49 damage from 51 meters. At short range, headshots do not make a difference on uninjured enemies unless using High Caliber. Headshots become more useful at long range, bumping the 49 damage up to 53.9, making it a two-shot kill. It is recommended to bring a good sidearm like the MR6 or RK5 for close range, as the MX Garand doesn't fare very well there.

Due to the lack of ability to reload, it is advisable that one uses Fast Mags and/or Extended Mag to ensure one is ready for firefights as often as possible. Because the easiest way for a player to reload is to fire the gun until the clip is empty. Scavenger would be a good choice to ensure one has enough ammunition, although a reasonable stockpile is given on spawn. An optical attachment is recommended, as the iron sights can be cumbersome for a weapon dependent on high accuracy. High Caliber is also beneficial, allowing the player to kill enemies with only one shot to the head up to medium range. Suppressor only reduces the range by 30% instead of the usual 65% for assault rifles, similar to the KN-44, making it effective.

The weapon can be very troublesome in Hardcore modes if the player does not keep track of their ammo count. The lack of a mid-magazine reload can result in the player having to pay attention to the ammo count to prevent reloading mid-fire fight.

Overall, the weapon is best suited for medium to long range. The Sheiva outclasses it in some areas, but this weapon excels in others.

The MX Garand appears in the Zombies maps Zetsubou No Shima, Gorod Krovi, and the remastered versions of Nacht der Untoten, Verrückt, and Shi No Numa, available from the Mystery Box. The weapon automatically comes with Rapid Fire and a Reflex Sight.

Its statistics are, for the most part, worse than the Sheiva - a weapon which can be obtained from the wall in the starting room of most Call of Duty: Black Ops III Zombies maps for 500 points, compared to the 950 points that the MX Garand costs to get from the box. However, shooting in the head can deal a one shot kill up until round 10, and it has 160 rounds in reserve compared to the Sheiva's 100 rounds, making it a decent point gun in the early rounds. It is not part of Weapon Kits, so it cannot be customized with attachments, and all it comes with by default is a Reflex Sight. Meanwhile, the Sheiva can be customized since it is included in the Weapon Kits feature. However, the MX Garand's default Reflex Sight may be an aid for newer players who have not unlocked the Sheiva in Weapon Kits, or that have not gotten any attachments for the Sheiva yet, but in the latter's case the player may wish to use the Sheiva instead anyhow so that they may unlock attachments. It can also be obtained through the purple plant in Zetsubou No Shima - making it possible to obtain the MX Garand without spending points.

When Pack-a-Punched, it becomes the Leng's Ping Beast which sports an enormous 30-round magazine and a sizable damage increase, making it a good weapon even for later rounds. Despite these advantages, it remains impossible to reload the gun without first emptying the whole magazine. Given the large magazine size, this can be problematic at times if the player, for example, has half of their magazine left but is unable to reload, forcing them to either waste the remaining rounds or try to reload in the middle of combat, which is a risky maneuver at best. 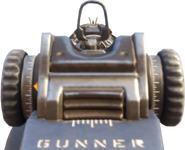