"Oi, Suzy!"
— MacMillan before he melees an Ultranationalist guard.

"Look at this place... Fifty thousand people used to live in this city. Now it's a ghost town... I've never seen anything like it."
— MacMillan's description of Pripyat.

During the Winter of 1996, fifteen years prior to the events of Call of Duty 4: Modern Warfare, a 33-year-old MacMillan was the commander of a two-man sniper team in the 22nd Regiment of the SAS which included then-Lieutenant John Price, who was assigned to assassinate future Russian Ultranationalist leader Imran Zakhaev, an arms dealer at the time. Price recalls that it was the first time the British Government had authorized an assassination order since World War II. The venue of the assassination was Pripyat, Ukraine, a once bustling town deserted ten years earlier following the Chernobyl nuclear disaster. The peaceful surrounding countryside and Pripyat itself had become overgrown and derelict (with the radiation from Chernobyl still in some places), the least likely location for an arms deal.

Price and MacMillan were both issued ghillie suits and camouflaged, suppressed M21 sniper rifles for the mission, along with suppressed USP .45 pistols. An M82 .50 Caliber Sniper Rifle was used for the assassination attempt.

MacMillan and Price had to sneak through the countryside around Pripyat to get to Hotel Polissya, overlooking where the exchange would take place and an ideal spot for the shot. Ultranationalist guards, armored patrols, attack dogs and helicopters are all obstacles they either hide from or take out, depending on the player's inclination. MacMillan's knowledge of the radiation zones around the perimeter of their route is sound, and after a brief scare when a "convention" of enemies arrives in Pripyat, MacMillan and Price make their way to the hotel. There they wait for two days for Imran Zakhaev to appear.

When Zakhaev eventually appears (right in front of the abandoned plant) with a suitcase full of money, Price and MacMillan prepared for the shot. After MacMillan gave Price ample warning of conditions that could impact the shot, such as the Coriolis effect, Price fired.

Zakhaev's left arm was torn from his body, but the kill was not confirmed and he managed to escape in a nearby UAZ driven by Vladimir Makarov. MacMillan assured Price that impending shock and blood loss would kill Zakhaev, and the SAS operatives moved to make their escape. Price quickly shot down a countering Mi-28 and the two rappelled from the hotel, the floor they previously occupied being destroyed by a second gunship mere seconds later. All went well for the British duo and their escape plan until an attempt to shoot down the Mi-28 pursuing them from the hotel ends in a serious leg injury for MacMillan whilst avoiding the crashing helicopter, forcing Price to carry him the rest of the way to the extraction zone. The duo fought their way through the darkening ghost town until finally reaching the extraction point at the Ferris Wheel.

Waiting for extraction, Price established a perimeter with MacMillan's remaining claymores and the two began picking off a gradually growing horde of countless Ultranationalists converging on the area. MacMillan covered Price with sniper support from a hill near the Ferris Wheel until their evacuation chopper arrived. Price quickly collected MacMillan and carried him to the chopper, the two successfully boarding and taking off mere seconds away from certain death at the hands of the Ultranationalist swarm in the city.

After the events of Pripyat, MacMillan later moved on from active field duty sometime between 1996 and 2011, likely immediately in the aftermath of the Pripyat operation. After retiring from field work, MacMillan was promoted from Captain and Price took his place. In the following years leading up to the Second Russian Civil War and in the time afterwards, the activities of MacMillan were largely unknown until the outbreak of World War III.

MacMillan: "That's a lot of hardware, John. What'd you plan on doing?"
Price: "What you taught me to do: Kill 'em all."
— MacMillan and Price in the opening cutscene to "Stronghold".

MacMillan made his return in Modern Warfare 3, having risen to the rank of Major General sometime prior. This new rank warranted his ascension as the Director of British Special Forces, overseeing all operations relevant to the SAS. He remained headquartered in Hereford in the United Kingdom for the entirety of the game, going by the callsign Baseplate.

MacMillan first made his return in the mission "Mind the Gap", where he served as the off field commander for SAS soldiers led by Sergeant Wallcroft on October 6. Collaborating with MI5, MacMillan oversaw the SAS operation to secure Vladimir Makarov's chemical weapons that had come into the local London port by way of Fregata Industries. The operation resulted in a heavy firefight throughout London between the SAS and the Inner Circle Ultranationalist faction who handled the chemical shipment. Ultimately the efforts of the SAS and MacMillan were in vain, as the weapons detonated within London nonetheless, as well as in other capital cities across all countries in Europe.

This attack paved the way for an Ultranationalist Russian invasion following Makarov's coup of the Russian government under President Boris Vorshevsky. Fortunately however, the United Kingdom was one of the few countries in Europe that managed to repel Russian invasion, alongside France.

With Europe being torn apart by conflict around him, MacMillan was unexpectedly contacted by his old friend John Price, who had been deemed a war criminal following his assassination of General Shepherd during the beginning of the war. Initially unwilling to offer help to Price due to the criminal nature of such an act, Price called in a favor MacMillan owed him for saving his life in Pripyat twenty years prior. This led him to share information with Price regarding the location of Waraabe, a Somali warlord and arms dealer with ties to Makarov.

Price once more consulted MacMillan after his failed operation in Prague to assassinate Makarov, which had led to the death of John "Soap" MacTavish. Equally intent to see Makarov pay for what he'd done, MacMillan briefed Price on a castle near Prague where Ultranationalists were suspected to store weapons and equipment. MacMillan provided Price with a large list of equipment, allowing him to go in with Yuri and attempt to kill Makarov.

Following the conclusion of World War III, MacMillan is not heard from again but is believed to have maintained his position as British Special Forces Director, accounting Price managed to get his name cleared of all charges put against him for his actions against Shepherd. While MacMillan is not mentioned, it can be assumed that he had a hand to play in the supplying and planning of the Task Force 141 operation led by Price at the Hotel Oasis in the Arabian Peninsula that led to the death of Vladimir Makarov and an end to the Ultranationalist threat.

MacMillan as he appears in Call of Duty: Modern Warfare Reflex.

Captain MacMillan rappelling from the Hotel where they attempted to kill Imran Zakhaev. 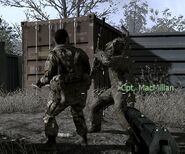 MacMillan, as seen on a video clip during the opening sequence of "Return to Sender".

Retrieved from "https://callofduty.fandom.com/wiki/MacMillan?oldid=2475282"
Community content is available under CC-BY-SA unless otherwise noted.