Any equipment obtained by the player
Machete (Call of Duty: Mobile)

"Ex U.S. Ranger turned gun for hire. Joined Jackals cutting his teeth in the slums of Soweto, South Africa. Marked with traditional scars to honor his heritage. Has earned a reputation for being a vicious operator."
— In-game biography

Mace is a Jackals operator of the Allegiance faction featured in Call of Duty: Modern Warfare. Mace was released on February 25th, 2020 during the Season Two of content for Modern Warfare as part of the "Mace Operator Bundle".

Mace used to serve with Simon "Ghost" Riley in the same unit prior to the events of Modern Warfare.[1] He also sports a skull mask similar to Ghost, albeit using a metallic skull face rather than a clothed one.

Mace appears in Call of Duty: Mobile and was added on July 24, 2020, during Season 8 The Forge as part of Melting Point Draw.[2] Mace has also a prominent role in the Comics, where he is an operator of The Five Knights. However, he later defects to the UAC after he is apprehended.

Mace first appears in Season 8 The Forge comics, where he is shown working alongside Krueger. He encounters Ghost & Tank in one of the major cities targeted by Makarov to use the Nova Gas on. While Tank engages Krueger, Ghost engages Mace. Ghost throws a grenade, disarming Mace, which lead them fighting in the Showers hand to hand. As they were fighting, Tank arrives after failing to take down Krueger and fires at Mace, causing him to retreat.

He is later seen again in Makarov's jungle base, intercepting Mara's attempt to thwart Makarov's plans. They brawl for a bit, ultimately ending in a standoff where Mara holds Makarov at gunpoint. Mace however, betrays Makarov and shoots him in the head before he escapes into an underground bunker. He then launches an EMP missile located in the bunker, which Mara & Soap's team arrive to late to prevent.

Later on, Mace in disguise attacks a building with his team of mercenaries then goes to Alcatraz to meet with an underground criminal magnate named Hidora Kai. They both start to plan out their next moves, disabling all electronic devices in the world, including military radio towers, communication centers, Mara and Soap's convoy and even the plane Ghost and Tank were flying in, using the EMP launched earlier.

Mace is then seen again later in the Hackney Yard production facility, donning his Armorer outfit. He personally confronts Tank, engaging in a brief skirmish before he knocks him down and snatches his weapon. Mace then uses both of their weapons to gun Tank down in front of Ghost, who arrives too late to save the former. Ghost, in a fit of rage, gives Mace a savage beating, subduing him and then arresting him. He is later shown to be at a black site for interrogation.

Mace was also listed to be a member of the Five Knights, according to Makarov, he is the one who only seeks for the downfall of the government.

Some time later, he appears again, this time in a prison cell. Confronted by Alex and Mara, he asks them if they're there to kill him. Mara sarcastically replies that she'd have used a knife (or a cheese grater) if she was indeed going to, while Alex says they're "here to talk". Mace retorts that he isn't talking, a reply that Alex expected, so he decides to read out his unredacted file. Knowing that Mace used to be in the army, as Alex once was, he states that he fought for something, with honor and courage. But he was later removed from the army, the sacrifices he made being denied, other men taking credit for his work and offering him nothing in return.

Mace mocks Alex for thinking he understands him, but he says that he understands enough for them to make a deal, to grant Mace his freedom, much to Mara's shock. Mace doesn't believe him, but Alex says that they are in desperate times that the UAC needs his help to capture Menendez. In exchange, Shepherd will authorize his release if he agrees to the deal. Alex then tells him it's the best offer he is going to get and drops a Ranger badge at his feet. After hesitating for a moment, Mace agrees.

Mace is later shown to be working alongside Mara and Alex to track down Menendez in the Raid, as this was the place Menendez was supposedly operating. Although Mara is distrustful of Mace and even contemplates shooting him, Alex talks her out of doing it. He takes down a bunch of guards, then later saves Mara by pushing her out of the way of a guard who opened fire on her. Mace states that the body armor he was wearing shook off the bullets fired and asks if Mara is good. She replies in the affirmative, and they then continue their mission.

In the meantime, Menendez realizes that Mace had betrayed them, and attempts to exfil via helicopter. He doesn't get far though, as Alex shoots the pilot before he can take off and Mace swiftly apprehends him.

Soon after their mission, Mace is shown to have accompanied Price and his team of UAC operators comprising of Charly, Rosa and multiple spec ops soldiers, to Texas to locate Templar. Price asks if Mace has any insights to the facility, to which he says he's been out of the loop. He goes on to say that he hates Templar as much as the group does and that he's more than willing to kill anyone he's told to, but Price is more interested in his knowledge of the facility, and sends him in first.

As the group ventures further, they are ambushed by Templar who was in waiting. Things are made worse when the French mercenary's consort, Dame, joins the battle. Templar throws a knife into Mace's hand just as he did Ghost, and is soon defeated by the duo. Along with the rest, he is chained to a pipe to prevent his escape. Afterwards, Gabriel Rorke shows up, mocking Mace for working with the enemy. He says that Mace simply likes to be on the winning side and that he's picked the wrong one as "everything's in position".

All of a sudden, Mace breaks the pipe he is chained to, and then wrestles Rorke. However, Rorke manages to use the same pipe to knock Mace as well as Rosa back when the latter attempts to grab a discarded gun.

Having had enough of toying with them, Rorke then draws his gun to Price's head, demanding to know Adler's location, but then the latter reveals himself to have already arrived there. Rorke mocks him for having come to him so soon, but Adler says that he's brought backup--together with an "old friend". The old friend is revealed to be Ghost, apparently alive and accompanied by the Ghosts' German Shepherd Riley, which leaves everyone, including Templar, in shock and denial. Ghost then says his famous line, "You can't kill a Ghost".

Mace, after breaking free of his binds, makes it clear that he wants Templar, which Price allows him to do. He then attacks Templar when the latter has knocked Ghost down, punching him. Now double teamed by the pair, Templar tries his best to fend them off, throwing knives into Mace's forearms. Mace struggles to get the knives out as he can't move his arms, due to Templar having struck his nerve clusters. 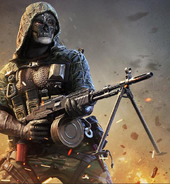 Mace with The Armorer uniform. 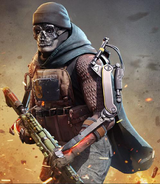 Mace with Back for More uniform. 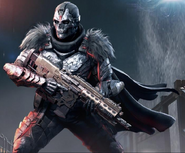 Mace states that he does not answer to Makarov.

Mace in his "The Armorer" skin among a few Mercs.