The machete is seen in the American levels on Roebucks back. Other Marines also have machetes in their character models. The machete is also seen in the Soviet campaign being used by Sgt. Reznov in the levels "Blood and Iron", and "Downfall". In the level "Blood and Iron", the machete is held by Reznov at the end of the level, just before the player gets on the train. In "Downfall", Reznov uses the machete to kill a German soldier who shot Dimitri Petrenko. Reznov jumps towards the German, slices, and stabs his victim with the machete, then kicks him off the ledge. He also used it to cut off the Nazi flag. This is the only time in the game the machete is used to kill a character. The machete isn't used at all in the American Campaign and only appears on the character models of some marines.

Reznov with his machete in "Downfall"

The machete makes a return in Call of Duty: Black Ops. A pair of machetes are seen being used by Danny Trejo in the trailer for the Zombies map Call of the Dead. The machete is also seen on some of the SOG troops during the campaign, including Swift. In the missions "Victor Charlie" and "Payback", there are occasions of Viet Cong guerrillas charging at you with a machete.

A Viet Cong fighter charging with a machete

A machete on Swift's back

The machete is seen being used by a member of the African Militia in the level "Back on the Grid". As Yuri runs from the militia, he falls through the roof of a shack and is faced with a man armed with the machete, the man attempts to attack him but is shot before he is able to reach him. The machete is unusable, just like the previous games.

The African Militia attacking the player

The machete is a usable weapon that is swung with the right hand instead of the left. It is a favored weapon among MPLA and, being seen dozens of times in the mission, "Pyrrhic Victory," where it is also used by Alex Mason after it is handed to him by Savimbi at the begining of the mission. It is also used by Raul Menendez and Mason if the player picks it up using an access kit in "Time and Fate". It is possible to decapitate with it. The PDF have unusable machetes on their backs in "Time and Fate" and "Suffer With Me". Some members of the Menendez Cartel have machetes on their backs in "Time and Fate". 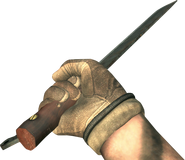 It briefly appears in the Invasion DLC trailer and a cutscene of Awakening. It was used by Samantha Cross to cut off the right arm of David Archer, which had been infected by a Cryptid plant. 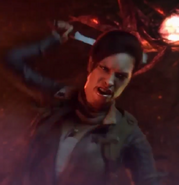 The Machete can be found and used in the zombies map Rave in the Redwoods and serves as one of four melee weapons available immediately from the start alongside the Axe, Golf Club and Spiked Bat. It can be found in the starting room on the front porch.

The Machete was added to Call of Duty: Modern Warfare Remastered on the May 2nd, 2017 update.

The Machete returns in Call of Duty: Mobile. It was added in August 2021 as part of the Season 6: The Heat update.

Prior to its introduction, the Machete made a brief appearance in the Season 10 The Hunt Comics, being used by Mace to attack Mara.

Mace with a Machete

The Machete briefly appears in Call of Duty: Modern Warfare, where it's used by The Wolf in Hunting Party. In multiplayer, the Machete is used in some Finishing Moves.

Multiplayer: Earn a Back Stabber medal in 15 different matches (melee kill from behind).

"Manufactured from a durable steel blade tempered to maximum toughness to resist chipping and breaking. Popular in many tropical countries as both a weapon and an agricultural tool."
— In-game description

Some unusable machetes can be seen in the huts in the campaign mission Break on Through.

The Machete was added to multiplayer as part of the Season Two content for the game. Some unusable Machetes can also be seen in the multiplayer map Apocalypse.

The Machete can be brought into any map via Create-A-Class, at Loadout rarity. It was added to the Mystery Box and Trials rewards pool as part of the Season Three: Reloaded update.

When upgraded via the Pack-a-Punch Machine, it becomes the El Slasher.

For weapon with camouflages, see Machete/Camouflage.

The Machete in First Person.

Inspecting the Machete.
Community content is available under CC-BY-SA unless otherwise noted.
Advertisement