For the semi-automatic variant, see Mauser C96.
For a submachine gun variant, see Escargot.
For the weapon class of the same name, see Machine Pistol.

The Machine Pistol is the sidearm of choice for the Waffen-SS. Soldiers will mainly use it while in Last Stand; however, they may also draw one in the middle of a firefight. If they are killed while doing this, they will drop their Machine Pistol, allowing it to be picked up and used.

The Machine Pistol (known as the M712 in the alpha stage and game files) possesses a cyclic rate of fire comparable to most of the SMGs in addition to possessing good handling traits, typical for a handgun. Its main downside, however is its extremely small magazine size, at just 10 rounds which, for an automatic weapon, is pitifully low. As a result, Extended Mags is a must as without it, the player will burn through their ammo very quickly, leading to extremely frequent reloads, thus making it the worst pistol ever in the game.

Quickdraw and Steady Aim are both solid choices for improving the Machine Pistol's reactivity and handling, making it a faster-drawing sidearm and giving it better hipfire respectively, while High Caliber can yield some occasional benefits for more accurate players.

Akimbo is a rather situational attachment as even though dual-wielded Machine Pistols can be deadly up close, the inability to aim down sights greatly restricts the gun's effective range and the small magazine size does not cater well to unaimed fire. Extended mags can once again remedy the magazine caveat somewhat.

The Machine Pistol is a great candidate for a sidearm to bring alongside a sniper rifle (like the Lee Enfield) or any other weapon that is ill-suited close range combat and can to some extent even hold its own against other automatic weapons.

In the November 9th, 2017 update, the Machine Pistol was nerfed to have decreased damage range values.[1]

The Machine Pistol appears in The Final Reich, Gröesten Haus, The Darkest Shore, The Shadowed Throne and The Tortured Path as a starter weapon, from Weapon Lockers and the starting weapon Waffenbox, costing 500 Jolts.

Damage is low, but can be seen as a weaker SMG, which can be used to gain a lot of Jolts through non-lethal hits, but emptying the whole magazine is ill-advised as the Machine Pistol will probably kill the zombie. If used as a weapon to kill zombies, it requires multiple hits to kill any zombie, being nigh-useless against Wüstlings in its default form. Ammo is rather low, with frequent reloads. Extended Mag or Akimbo should be used if one wants to practically use the Machine Pistol as a killing weapon.

When upgraded through the Ubersprengen or by Mk. II Freefire special mod, it becomes the Red 9, doubling the base ammo count to 20 rounds, increasing damage and giving the Red 9 the chance to create a small electric burst that deals damages zombies in an area. The Red 9, like the regular Machine Pistol, performs similarly to a SMG, and as such has a similar mobile playstyle. Although ammo is not as big of a problem, the ammo cost has increased substantially from 250 Jolts to 4000 Jolts, meaning that the Red 9 is not very cost effective if used on individual zombies; zombies grouped together will be better to gain a return on ammo investment. 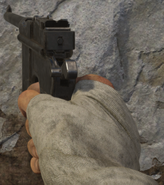 The Machine Pistol in first person 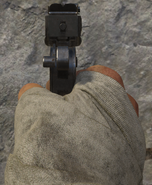 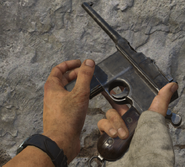 Inspecting a side of the Machine Pistol

The Machine Pistol returns in Call of Duty: Vanguard.