Magma is a multiplayer a map included in the Call of Duty: Black Ops II downloadable content pack Uprising. It is set in the futuristic city of Kitakyushu, Japan that has been abandoned due to a disastrous event caused by a volcanic eruption. The map has some spots covered in volcanic rock and lava that will damage or kill players that step foot onto said areas.

The map's destructed structure simulates an urban environment destroyed by a volcano having lava rivers and volcanic rocks that can burn anyone.

The smallest building withing the map having one route.

One curved room two floor building with a drinking table.

One fish depot room with a trolley separating paths leading to a small shipping yard.

Two rooms: ATM Room and Computer Room with a broken window that jumps down to magma bridge.

One room with high and low ground. One of the exit's/entrances leads to an accessible train that serves as an alternative route.

The last two buildings may be the most important ones because of the other path routes it leads to.

This lane is composed of the fish shipping yard and a couple of seats.

This lane is the main road destroyed by the eruption. Whats left of the road on the very center point is now a crumbled bridge. It is perhaps a very common lane players venture in.

This lane connects to both the right and left lanes by either the ramp roads or by the bridge and steps. As stated from the previous text, the Post Office has a broken window that jumps down to a magma bridge. The bridge leads to three passages:

Above, there are steps between the two inaccessible buildings leading to the left lane.

This lane has a tunnel with a volcanic rock and lava. A mossy rock separates paths before entering the tunnel and may obscure enemy sights due to the height it is built.

Some of the bicycle parking sheds and bus stops act as coverage to call in scorestreaks.

The objectives stated below are located outside.

All the flags are located at the middle lane.

Both of the bombsites are not on the middle lane.

An aerial view of Magma.

Magma loading screen.
Add a photo to this gallery 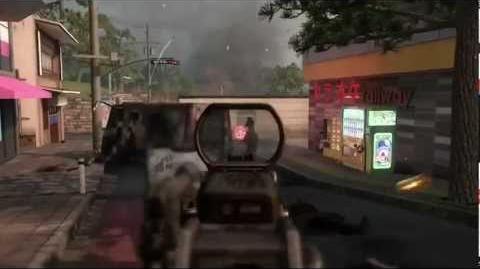 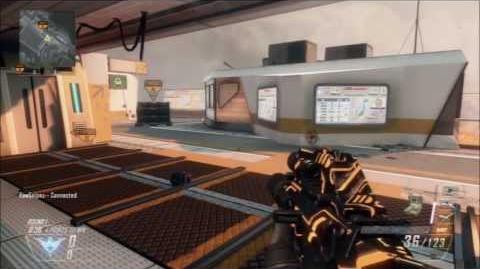 COD Black Ops 2 - Search & Destroy On Magma 12-0 First Round Clutch ! No Commentary
Gameplay in Search and Destroy.
Add a photo to this gallery

Retrieved from "https://callofduty.fandom.com/wiki/Magma?oldid=2539385"
Community content is available under CC-BY-SA unless otherwise noted.