6 rounds
(9 and 12 with ammunition attachments)

The Magnum is a revolver featured in Call of Duty: Black Ops Cold War.

The magnum appears in several missions of the campaign. Another variant of the magnum is the Redeemer, which can be found in the campaign mission "Echoes of a Cold War" and "End of the Line".

The Magnum can be brought into any map via Create-A-Class, at Loadout rarity and can be found at any rarity via the Mystery Box for 950 Essence. When upgraded via Pack-a-Punch Machine it becomes the Private Eye, gaining increased stats. While equipped with the Dual Wield attachment, the upgraded variant gains the name Private Eye & Femme Fatale. 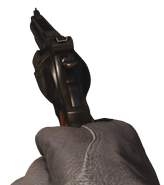 The Magnum in First Person.