For other uses, see Makarov.

The Makarov appears often during the campaign as the main sidearm of the NVA and the Spetsnaz, and is also used by the Vorkuta Prison Guards and Viktor Reznov. It is most notably used by Alex Mason to hold off enemy prison guards in "Vorkuta" and to execute Steiner in "Rebirth." It is also seen in the mission "Executive Order" and "The Defector."

The Makarov is one of the three handguns unlocked along with Create-A-Class at level 4.

The Makarov, like all other magazine fed pistols, is a regular damage pistol. In close quarters, the Makarov will deal 40 damage per shot, netting a three hit kill. However, this damage quickly falls off to 20 damage, demanding a five shot kill, or a two hit kill in Hardcore game modes. The Makarov's low damage at moderate range makes it only suitable as a close quarters compliment to Sniper Rifles and Light Machine Guns.

The Makarov also has average accuracy for a pistol. The recoil per shot is very low, and the iron sights are clean and do not obstruct the target. However, the centerspeed is very low, set at 1100. This allows recoil to build up if the player is shooting close to the firecap. However, with a disciplined trigger finger, the Makarov will have almost perfect accuracy.

The Makarov has good handling traits for a pistol. The aim down sights time is quick, the player will move at 100% of the base speed, the Makarov has fast switch speeds, and the Makarov reloads at a fair speed for a pistol, taking 1.6 seconds to go through the entire animation for a tactical reload, and 1.9 seconds for an empty reload animation.

The Makarov's key weakness is its magazine capacity. The Makarov possesses an eight round magazine. Although this magazine is the second biggest default magazine in its class, it is small nonetheless, requiring a precise aim in order to put the Makarov to good use.

The Makarov has the same attachment selection as the M1911. The Upgraded Iron Sights adds tritium illuminated beads to the front and back posts, allowing for the enemies to have higher contrast against the iron sights. The effect can be negligible for some, but for others, it can do wonders, and only costs a very cheap 250 CoDpoints.

Dual Wield is a good choice to consider on the Makarov, as it has the highest magazine capacity per pistol of the three starting pistols (eight per pistol), making it the most likely of the three to score kills. However, it is outperformed by the CZ-75 Dual Wield.

The Suppressor is another good fit on the Makarov, as it has a larger magazine than the M1911 with the Suppressor equipped. The Makarov with Suppressor is a good compliment to a stealth class made early on, as it allows players to remain silent with their secondary weapon. 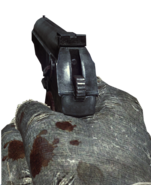 The Makarov in first person. 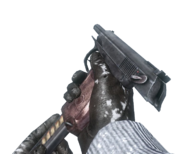 Diving with the Makarov.

Third person view of the Makarov.

Render of the Makarov. 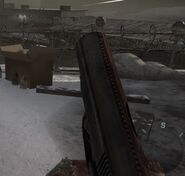 Another view of the Makarov in "Vorkuta".

Jason Hudson using the butt of the Makarov to hit Alex Mason.

The Makarov is the sidearm of choice for the Soviets and Vietnamese. It has a 12-round magazine, clear sights and decent stopping power, capable of killing an enemy in two or three hits at the chest, or one headshot. The player will gain a Makarov with a suppressor in Last Stand instead of a normal Makarov, even if the player has chosen a normal Makarov as a weapon.

The Makarov PM in First person. 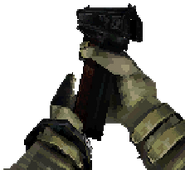 The Makarov returns in the Call of Duty: Black Ops II campaign and is available starting with the mission "Old Wounds." 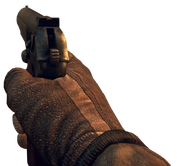 The Makarov in first-person.

Reloading an empty Makarov equipped with a Silencer. Note that the bullets are still in 2D, unlike most weapons in Black Ops II. 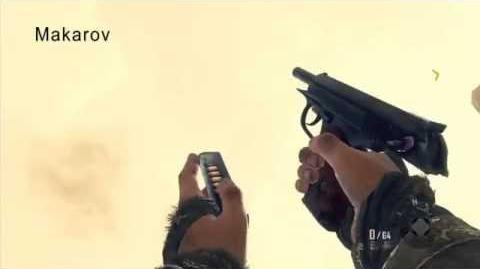 Get 4 Kills while using Pistols in 5 different matches

"A dependable fallback in close quarters, this double-action/single-action sidearm comes with a few custom gunsmith mods that make it an outstanding addition to any arsenal."
— In-game description

The Makarov returns in Call of Duty: Modern Warfare as the Sykov. It was added to the game in late 2020, when it was initially exclusive to Survival Mode, while also being obtainable in multiplayer from Weapon Drops. It was eventually fully added to multiplayer and Warzone in April 15th, 2021.

The Sykov in first person.

The default Iron Sights of the Sykov. 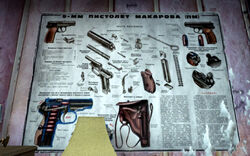