For the supply drop variant of the Bulldog called "Man-o-War", see Bulldog.

The Man-O-War is an assault rifle featured in Call of Duty: Black Ops III. It is unlocked at level 28, and costs one Unlock Token to unlock it.

The "Man-O-War", is an infantry rifle in service with Winslow Accord forces worldwide. The Man-O-War is designed to be effective against both soft targets and the wide variety of combat robotics ubiquitous on the modern battlefield.

The Man-O-War chambers the heavier 7.8x54mm cartridge built for range and stopping power. Although fully automatic, the Man-O-War is configured for a slow rate of fire,lowing a shooter to place single shots with accuracy or deliver a volume of devastating firepower. A number of recoil control mechanisms combined with the weapon's weight help mitigate the kick of its large caliber round.

The weapon has been criticized by some as too heavy and cumbersome for use as an infantry rifle, but many Winslow Accord forces have come to praise it for its versatility and adaptability.

A wide variety of attachment and modifications allow the weapon to be configured for more specific needs, and it is common to see the weapon used in both sniper and fire-support roles.

The Man-O-War is a high damage assault rifle with a low rate of fire and high recoil. It will kill in three shots out to 37.5 meters, and will be a four hit kill from any range beyond that. In Hardcore it will kill in one shot at all ranges.

The Man-O-War's handling is quite poor. The iron sights are clean, but the recoil is high, kicking highly up and to the left. Its ADS time is the slowest within its class at 0.3 seconds, and it also exits slower after sprinting and moves slower while aiming and firing than all other assault rifles. Due to the Man-O-War's high recoil and slow handling, this will make the Man-O-War much less user friendly and capable in close ranges than other assault rifles.

The Man-O-War's magazine capacity is standard for the assault rifle class, holding 30 rounds per magazine. Reloading isn't as frequent is other assault rifles thanks to the slightly lower rate of fire, but the recoil might make users waste bullets.

The Man-O-War has the usual assortment of Assault rifle attachments. The optical attachments are valued based on the user's preference, and the range the player will most likely be using the Man-O-War. At longer distances, a long range sight may be desirable, but for medium ranges, the iron sights may be preferable to save space in your class for other, more tangibly beneficial attachments.

High Caliber and FMJ will make the Man-O-War deal more damage through headshots and through cover, respectively. Both attachments are good fits for the Man-O-War, as its high damage per shot is improved in certain conditions with these attachments.

The Quickdraw Handle and Adjustable Stock improve the Man-O-War's handling characteristics. These attachments aren't detrimental in any way, but if the player is playing in a more defensive role, these attachments may not be as useful.

The magazine modifying attachments will increase either the magazine capacity or decrease the reload speed. In the right hands, the player won't commonly reload with the Man-O-War, making the value of these attachments questionable.

The Suppressor is a terrible fit on the Man-O-War, as it takes away a lot of range, making the Man-O-War need an extra shot to kill at longer distances. Due to the Man-O-War's low rate of fire, this makes the Man-O-War much weaker as an Assault Rifle. The Laser Sight is a rather unnecessary option, as although its effect isn't detrimental, the Man-O-War shouldn't be used in close quarters combat due to its unforgiving rate of fire.

Long Barrel is an excellent attatchment for the Man-O-War. Since the weapon's highest shots-to-kill is four shots, Long Barrel will increase the already large three-shot-kill range, increasing effectiveness across longer distances where the player may need four shots to kill without it.

The Man-O-War appears in the Zombies maps Shadows of Evil, The Giant, Der Eisendrache, Zetsubou No Shima, Gorod Krovi, and Revelations. In all maps, it can be found in the Mystery Box for 950 points. In Shadows of Evil, it is also possible for it to be obtained from a purple pod. It is the last assault rifle to be unlocked for use in Weapon Kits, and is unlocked at Level 31.

When upgraded via the Pack-a-Punch Machine, it becomes the Dread Armada. It has increased damage, an Extended Mag and more reserve ammo. The Dread Armada also features the addition of FMJ and High Caliber, however it is not known whether or not these additional attachments are purely cosmetic.

The Man-O-War in first person 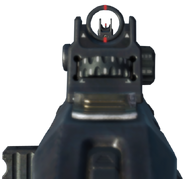 Aiming down the Man-O-War's iron sights 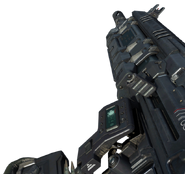 Chambering a round into the Man-O-War

First-person view of the Dread Armada, the Pack-a-Punched version of the Man-O-War
Add a photo to this gallery

A customized Man-O-War in Paintshop

A Man-O-War being customized in the Paintshop

"Skull" custom variant, equipped with a Recon Sight, Long Barrel, Grip, Stock, FMJ shroud, and a Silencer
Add a photo to this gallery

Retrieved from "https://callofduty.fandom.com/wiki/Man-O-War?oldid=2342388"
Community content is available under CC-BY-SA unless otherwise noted.