Man-at-Arms is a trait in Call of Duty: Infinite Warfare exclusive to Merc. It is unlocked at level 7.

Man-at-Arms negates the mobility disadvantages with the player's loadout choice, as well as allowing the player to spawn with maximum ammunition. Man-at-Arms allows the player to run at the same speed as a Submachine Gun user even when using a Launcher or Light Machine Gun, and allows a much higher amount of starting ammunition for the player - somewhat compensating for the lack of Scavenger at lower levels. This trait is universally beneficial, since SMGs have a great thirst for ammunition, and the increased starting ammunition helps. Assault Rifles can also benefit from increased mobility with a slightly more active trigger finger, bolstering their well-rounded stats. Sniper Rifles may gain the least amount of benefit from this trait, since Sniper Rifles are neither helped by the increased movement speed nor the increased ammo, due to the defensive capabilities of a Sniper Rifle. LMGs benefit the most from the increased movement speed and ammunition, becoming more effective for defensive and offensive play styles. The Mauler exhibits the greatest benefit due to the close quarters capabilities of the weapon.

Combined with Reactive Armor, this is a great set of Trait and Payload to use when going for Juggernaut medals or De-Atomizer strikes, it mostly elimates the need for Scavenger and the Reactive Armor payload can save the player during a hectic situation. 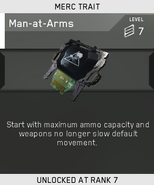 Man-at-Arms being unlocked in Multiplayer.
Community content is available under CC-BY-SA unless otherwise noted.
Advertisement