For the original character, see Griggs.

M4A1, Any weapon obtained by the player

Smoke Grenade, Frag Grenade, Any weapon obtained by the player

"A Marine’s Marine who truly believes in the rule of law, few NCOs in the Corps are more beloved than Marcus Griggs. Fair, capable, and charismatic, Griggs can motivate and inspire troops in ways other officers only dream of."
— In-game biography

Griggs and his team members assists Alex in capturing Omar "The Wolf" Sulaman in Rammaza, Urzikstan, while repelling the other Al-Qatala terrorist cells who were protecting him inside the hospital.

Griggs' voice is heard near the end of the Season Six cutscene as he awaits John Price's order. He was released on November 10, 2020, during the Season Six of content for Modern Warfare as part of the "Sgt. Griggs Operator Bundle". [1]

In the cutscene for the intel mission "The War Room", Griggs is heard saying that him and his unit, the Demon Dogs, have cordoned off the silo. However, they are not seen.

Grigs appears in Call of Duty: Mobile and was added as part of the Season 7: Elite of the Elite Battle Pass. [2] 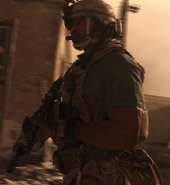 Marcus Griggs, as seen in the Modern Warfare Launch Trailer.

Griggs as an operator.