For a similar enemy, see Abomination (Cold War).
"You got my wife beat. She only has TWO faces!"
— Jack Vincent

"I have fought bears more scary than you!"
— Nikolai Belinski

Margwas are an enemy in Call of Duty: Black Ops III on the Zombies maps Shadows of Evil, Dead Ops Arcade 2: Cyber's Avengening, and Revelations. They also appear in the intro cinematic of Alpha Omega.

The Margwa is a three-headed monster bearing tentacles. It will swipe at the player if close to them, similarly to a a normal zombie would and it deals the same amount of damage as a regular zombie's attack. It also has a slam attack, which is powerful enough to down a player in one hit without Juggernog, and powerful enough to destroy a player's Rocket Shield. The Margwa also will destroy Li'l Arnies deployed by the player.

When playing with other players, if one makes themself disappear with a GobbleGum such as "In Plain Sight" or "Anywhere But Here", the Margwa will turn its attention to the next visible player, or teleport to an area where the other players are using its purple shadow.

In order to kill a Margwa, the player must shoot and destroy all of its three heads. The heads can only be damaged when they're open and glowy. Once a single head is destoryed, the Margwa will move faster, and with each destroyed head it will release a Parasite and will reward the player 500 points, for a total of 1,500 points (The bonus points are affected by Double Points). The Margwa can also be killed by knifing it with the Pop Shocks GobbleGum, which the effect will kill the Margwa with one knife, after a slight delay. Killing a Margwa (usually) grants the player 1000 XP points, and the first killed Margwa always drops the Margwa Heart part, which is required to craft the Apothicon Servant. If the heart is not picked up, it will disappear after a while, but will appear again when the next Margwa is killed.

Margwas appear prominently in the map's Easter Egg, spawning upon completing the second and fourth rituals, and seven per player while upgrading the swords (over the course of four rounds) as well as spawning each time the Shadow Man re-activates his shield during the "Kill the Shadow Man" step. Once the Shadow Man is killed, the player is put into an infinite Margwa round, with the head of the Margwa glowing in Purple instead of Yellow. After killing a Margwa, the player can turn into the Beast indefinitely. The only way the bar goes down during Beast mode is by taking damage, or from either Margwas or the pink circles on the ground.

Players can also obtain the Margwa Head, which makes the players put the shell of a Margwa head as a hat, providing protection from the Margwa's slam attack.

In Dead Ops Arcade 2: Cyber's Avengening, the Margwa appears in a challenge round.

In the map Revelations, the Margwa makes a return as a round-based boss. There are three types of Margwas, each one is different from each other. The Elemental Margwas are distinguishable for their darker skin-tone, and different colored haze. Regular Margwas do also appear, with no additional attacks or effects.

Red Margwas, referred to as 'Fire Margwas' glow an orange-ish red, and differ from the others for their unique slam attack, which causes blasts of fire to pursue the player in a straight column. While this does apply ranged attacks for the Margwa, this attack is relatively slow, and can be outran due to it only moving in a straight line. The attack is still devastating, so keep an eye out when the Margwa slams its tentacles on the ground. These Margwas can also ignite zombies, making them combust upon death.

Purple Margwas, or 'Void Margwas' emit a purple glow. Their slam attack is modified to produce a portal/void, like their name implies, which makes skulls come out and attack the player. This attack is very similar to the charged shot of the Void Bow from Der Eisendrache. It's best advised to have a shield when dealing with this Margwa Type, since you might not be able to outrun the blast, albeit the skulls can be shot with any gun to prevent them from harming the player.

A Margwa in Shadows of Evil dying. 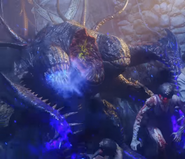