Marine Camouflage is a type of weapon camouflage found in Call of Duty: Modern Warfare 3.

Marine was a secret camouflage exclusive to the Wii version of Call of Duty: Modern Warfare 3. However on November 2nd, 2012 it was made available on 360, PS3, and PC for some users, although not all have received it.[1]

It is unlocked after prestiging once, along with the Winter Camouflage (on Wii). The pattern is a pixelated pattern, similar to the "Digital Camouflages" of past Modern Warfare titles. 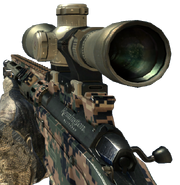 A third person view of Marine camouflage on the G36C.

Marine (Pattern)
Add a photo to this gallery

Retrieved from "https://callofduty.fandom.com/wiki/Marine_Camouflage?oldid=2483984"
Community content is available under CC-BY-SA unless otherwise noted.