The Rescue of Peter McCain

For the faction with a similar name, see Marine Raiders.

The Marines were a small strike team of four sent to extract Peter McCain. They appear in the Zombies map Verrückt. The only notable character from the Marines is "Tank" Dempsey, who survived and became one of Edward Richtofen's test subjects. However, two other marines, John "Banana" and "Smokey", are mentioned in emails sent between "Vbush" and "Roppen" on the Black Ops Data Servers.

The team was sent to the asylum to extract OSS operative Peter McCain. They failed in their mission and, with the exception of "Tank" Dempsey and Paxton "Gunner" Ridge, were killed by the overwhelming hordes of zombies. Dempsey was later captured by Richtofen and became one of his test subjects, replacing Pablo Marinus after he was accidentally killed, while Paxton ended up joining the CIA.

One of the Marines as seen in the iOS game, Call of Duty: Zombies.

A Marine about to be attacked by a zombie. 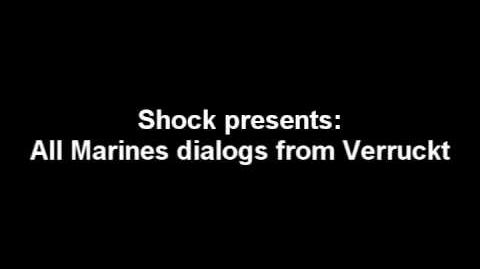 All Marines dialogue from Verrückt
Русский
Community content is available under CC-BY-SA unless otherwise noted.
Advertisement