For the challenges of the same name, see Marksman (Challenges).

50 Kills while holding breath
Marksman identifies enemy targets at a longer range by showing their player names at a greater distance. The Pro version allows for longer hold breath period, doubling the player's hold breath time from four seconds to eight seconds, similar to the perks Iron Lungs and Scout from previous games. This works very well for sniper rifles, allowing a player to keep the scope's reticule steady for a longer time, but even if the player is not using these weapons, the Thermal Scope also benefits from the Pro effect as well as the Breath proficiency.

The Pro version is unlocked at 50 kills while using Marksman and holding breath. The effects of Marksman are however, canceled out by Assassin Pro. The Breath proficiency can be helpful in going for completeing the Marksman perk challenges.

The Marksman perk was cut from Call of Duty: Ghosts. However, audio files for the perk remain.[1]

Marksman makes a return in Call of Duty Online as a Tier 3 perk, allowing identification of enemies at longer range and longer breath holding time.

Marksman returns in Call of Duty: Infinite Warfare. It lets the user acquire enemy names from a greater distance and reduce flinch on all weapons. It affects sniper rifles with a greater benefit than other weapons, however - seeing as this perk is meant to help in long range combat. It is unlocked at level 11.

For weapon classes other than Snipers, the main benefit of using this perk is to help one find enemies. For example, an enemy far away could be crouched, but due to no clear indication an enemy is there, the player fails to notice the enemy. With Marksman, this issue is resolved. It also slightly reduces flinch - but not enough to warrant the use of this perk as much as Toughness in previous Call of Duties. For Snipers, flinch is significantly reduced, meaning that along with the previous benefits, being shot at doesn't affect one as much. It is interesting to note that this effect applies to anything in the Sniper class. Take the EBR-800 for example. When switching to AR mode, the flinch reducing effects of Marksman still remain - giving the player a great advantage. This also applies to the DMR-1, or more specifically, the Spectacle Epic variant, where the standard high level of zoom scope is replaced with an interesting Reflex sight - meaning it behaves more like a semi-automatic Assault Rifle. Using different optical attachments do not affect this perk's effects, such as using the lower-zoom Scout on a sniper. 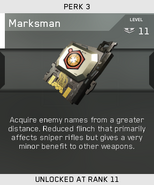 Marksman being unlocked in multiplayer. 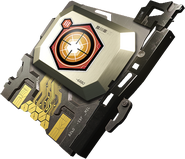