"Preparing this location should be no trouble at all for Marlton! Dun dun dun, engineer of destiny!"
— Marlton

Marlton, with the Victis crew, takes a central part in the Zombies Comics.

He can be seen in Call of Duty: Black Ops 4 in the map Blood of the Dead in a cryopod and added to Blackout as well. He is a playable character along with the rest of Victis in Tag der Toten.

Before the destruction of Earth, Marlton was in a nuclear testing site in Nevada, hiding out in a nuclear bunker after a recent nuclear explosion. Meanwhile, a group of CIA and CDC operatives enter the area due to a distress signal, and are met with soldiers and nuclear scientists that have been reanimated by element 115 from a nearby Nevada base. During the ensuing fight, three missiles launched from the Moon impact earth, one of them hitting the testing site. Marlton then escapes the area as the only survivor.

At some point after the destruction of Earth, Marlton met Abigail "Misty" Briarton, and the two began to fight the zombies in a town in Hanford, until they were picked up by Russman and Samuel J. Stuhlinger in a bus. The four survivors were then contacted by Dr. Ludvig Maxis, and were instructed to activate the Pylon, as part of his plan to deal with Edward Richtofen's forces of the undead. However, Stuhlinger started to hear Richtofen's voice in his head, telling him to activate the tower with his own methods for unknown purposes.

After the device was activated, the group was teleported by Richtofen to a skyscraper in Shanghai, China. After witnessing Russman being killed by a Jumping Jack, Misty, Marlton and Stuhlinger continued to defend themselves until they were killed as well. However, Richtofen would then rewind the events, so that the group could carry out his tasks. Here, Maxis and Richtofen continued to give the four survivors instructions to activate another tower.

After the task was done, the group traveled on foot towards Africa. They set up camp in the desert, planning what to do next. The day after, the survivors proceeded to "the rift", and ended up in an underground Western town. Here, Maxis and Richtofen continued to give the survivors instructions to activate the third tower, and warned them of the other's plans. In the end, their allegiance shapes what happens to them next. Canonically, they complete Maxis' endgame. However, Marlton, as well as the others, survive and return in the Call of Duty: Zombies (comic) on a new mission to acquire the Kronorium.

If the player decides to follow Maxis' side of all three Easter Eggs, Maxis will assume control of the zombies (giving them orange eyes in the process), and will send Richtofen's soul into a single zombie (which will have blue eyes). However, Maxis then reveals his true intentions of destroying the Earth to reach Agartha.

If the player decides to follow Richtofen's side of all three Easter Eggs, Richtofen enters Samuel's body and uses him as a physical host on Earth, with his eyes now flickering blue. Maxis, meanwhile, is banished by Richtofen from the systems of Griffin Station for good, his corpse is seen on round infinity, indicating that he was killed by zombies.

His appearance is of a stereotypical nerd in his twenties. He wears a white-collared shirt, blue jeans, glasses (which are shown to have been repaired with cloth tape in the Buried cutscene), and nice brown shoes accessorized with a pocket protector and a wrist calculator. He is covered in soot and has a few tears in his pants. He also wears a loose tie.

Marlton favors using a larger, advanced vocabulary, and thinks of himself as mentally superior to the others. He is often pedantic and smug although quite self-conscious. Marlton is very knowledgeable about weapons, often reeling off facts and critiques on the guns he acquires from the Mystery Box (though he seems to have a dislike of most of them).

Marlton likes Misty, however he dislikes Samuel, and despises Russman even more, which is reciprocated by him. However, his hatred for Russman only goes so far, as he is above refusing help from him when he is downed or swarmed, and is even willing to help Russman remember his past when he loses his memory, as the Buried cutscene shows.

He has a strong emotional attachment to Misty and often compliments her. Misty has a crush on Marlton, and he reciprocates those feelings despite claiming he feels no emotion, and explains that he has a special relationship with her. In the comics, Marlton seems to be more emotionally attached to her and her safety, such as immediately aiming his gun at Stuhlinger when the man pushes her and calling out her name after witnessing her fall into a hole created by a zombie. Though he suffers from his phobias, he seems to not be fazed by Misty's touches when Misty cups his chin and gets close to his face. Later on in the comics, he ends up placing a hand on her shoulder, giving her a smile.

Marlton seen with the others in Die Rise. 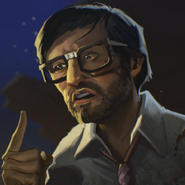 Marlton and Misty fighting in Town.

Marlton and Misty meet Stuhlinger for the first time at Town.

Marlton with the others at TranZit.

Marlton with the others at Die Rise, wielding two B23Rs.