Knife, any equipment equipped by player

Aviation Machinist's Mate 3rd Class Mateo Hernandez is a character featured in Call of Duty: Vanguard. First appearing in the campaign missions The Battle of Midway and Numa Numa Trail. Mateo was released as a playable Operator of the Harpy faction in Vanguard and Call of Duty: Warzone on April 27th, 2022 with Season Three as part of the Battle Pass.

Mateo Hernandez was born in January 1919 in Texas, growing up among a large family of immigrants from Mexico. Mateo dreamed of becoming a civil engineer but joined the Navy when the war broke out in 1941.

War in the Pacific

As an Aviation Machinist's Mate 3rd Class, Mateo became the tail gunner of Wade Jackson and his S-17. In June 1942, both participated in the Battle of Midway where the US Navy engaged the 1st Air Fleet of the Imperial Japanese Navy. Along with other squadrons, Mateo and Jackson successfully defended the American fleet against the Japanese but also managed to sink both Soryu and Kaga aircraft carriers.

In November 1943, Mateo and Jackson's S-17 was shot down above Bougainville. Severaly injured after the crash, Wade was lifted by Mateo who then hid him and left to find help. However, with no sign of Mateo's return, Wade went out looking for him. Shortly after, Wade tried to save Mateo from Japanses soldiers but both ended up getting captured. They were rescued by James "Booker" Washington and his unit from the 93rd Infantry Division of the Army. Booker asked both Wade and Mateo to help his unit secure a ridge nearby, held by Japanese soldiers. The team succesfully took the ridge and made their way to an airfield located on the other side. They secured a D3A Type 99, allowing Wade and Mateo to fly away but not before assisting the rest of the 93rd Division in their assault against the Japaneses.

Still deployed at the Solomon Islands in 1944, Wade and Mateo were having an argument over the former's recklessness while he complained about the ruined paint job on their plane when a plane crashed near their location. From behind cover, they watched a British soldier exiting the plane unscathed, calling out for Wade. Both men drew their gun at him, demanding to know who he was. The man introduced himself as Carver Butcher and was looking for the "the best pilot in this goddamn war". But after the two men discussed, Butcher began to doubt about recruiting Wade which prompted Mateo to step in and convinced Butcher of Wade's capabilities. Butcher and Wade then left on Wade's plane as Mateo watched, praying that they would bring an end to the war soon so that he could go home to his family.

At some point, Mateo would also be recruited by Butcher and the SOE into Task Force Harpy alongside Florence Carter and Kim Tae Young. Harpy was tasked with intercepting a convoy of Nebula V bombs on the island of Caldera before they could be detonated.

After the war ended, Mateo witnessed firsthand the prejudice and racism against Mexicans and decided to speak out against the injustice while also helping families reunite across the border.[1]

Mateo, Florence and Tae Young in the Season Three cinematic. 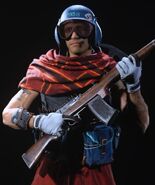