The Matryoshka Doll is a tactical grenade available in the Zombies maps Ascension and Call of the Dead. The dolls returned in Call of Duty: Black Ops 4 in the map Tag Der Toten. When thrown, they act as a cluster bomb, exploding four times. Most often, one doll will explode into three dolls that fly out in random directions. Matryoshka Dolls do extremely high damage to zombies, and are usually lethal, but on higher rounds they tend to create crawlers. A Matryoshka Doll also appears in Call of Duty: Black Ops Cold War as an easter egg in the map Moscow.

Its usefulness can be hindered by its random nature of explosions, resulting in the possibility of the grenade thrower harming themselves; however, this can be remedied by acquiring the PhD Flopper Perk-a-Cola. It is a tactical grenade that does not distract zombies like the Monkey Bomb or Gersh Device. It is most useful when surrounded from all sides, as it will clear the path for the player. It is more useful for dealing with Space Monkeys than regular grenades and the Gersh Device, as monkeys are not killed by the Gersh Device and cannot throw back Matryoshka Dolls.

It may be more useful to have the Gersh Device, as it will both pull zombies towards itself and kill zombies, whereas Matryoshka Dolls can only be used for killing and can possibly damage the player that threw them, though it is much faster to use.

The Matryoshka Dolls deal a massive 100,000 damage per doll (in comparison, the Scavenger only deals 11,500 damage and the upgraded V-R11 Lazarus deals 83,000 damage) which is a guaranteed one-hit-kill up to and including round 57, and up to and including round 72 if all four dolls hit the same zombie(s). It should be noted that Matryoshka Dolls have a 0.05 multiplier against George A. Romero, and as such, can only deal up to 20,000 damage to him if all dolls hit.

There are four Matryoshka dolls scattered throughout Ascension. These dolls are characters of the four original characters, and will respond when the player presses the 'use' key with a comment in a high-pitched version of the appropriate character's voice. These comments differ when different characters interact with the different dolls. The character who activates them will also react to the doll. The locations of the dolls are:

The dolls glow in different colors when thrown, the character's dolls, however, will glow in accordance to their point counter color.

Edward Richtofen's Matryoshka Doll. Notice the smiley face on his arm rather than a swastika. 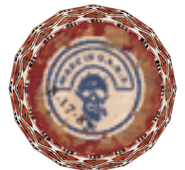 The bottom of a Matryoshka Doll.

A Matryoshka Doll being primed in Call of the Dead.

The Matryoshka Dolls in the Mystery Box in Black Ops Zombies.

The Matryoshka Doll in Call of Duty: Black Ops Cold War alongside a Richtofen doll. Note that the Richtofen doll was only present in the Alpha, and has been subsequently removed in the Beta. The normal Matroyshka doll, however, is still present.