The Mauler is a light machine gun in Call of Duty: Infinite Warfare.

When all side missions are completed, the Mauler unlocks the Heavy Mauler upgrade, which slows the weapon's fire rate in exchange of firing heavier, damage-dealing rounds.

The Mauler is unlocked at level 13. It has a tight hipfire spread due to the integrated gaussian delinker, thus enabling a surprised Mauler user to simply swing around and pull the trigger on the target. The weapon functions similarly to the Chain SAW from Call of Duty Ghosts, with a high rate of fire and tight hipfire spread, although the Mauler can aim down the sights to have better accuracy. Damage is low, taking 4 or more shots to kill a full health target. However, this is compensated for by a high rate of fire and best hipfire spread of all LMGs in the game.

The Mauler is available from the Magic Wheel on all maps for 950 points. It is available for customization at level 37. The Mauler has decent damage and fire rate, being able to easily carry the player to scenes 20 and above. However the player by then should have either upgraded it or bought bang bangs.

The Mauler has the highest ammo and hipfire accuracy of all LMGs in zombies, and as such is a sought after weapon for any need in zombies. However, the weapon truly shines when either of the epic variants are equipped, the Mammoth and Sentinel. Both variants are powerful in their own right and are arguably the best variants for zombies. Bosses such as the Brute and the Crog Brute are easily disposed of with these two variants.

The Mammoth variant performs somewhat similarly to its Multiplayer counterpart, dealing massive damage per shot, killing zombies in the head with one shot until the late teen scenes. However, it is not affected by the reduced magazine size seen in Multiplayer. Although some of its traits such as having the best hipfire accuracy and high fire rate are removed, the Mammoth gains in return double damage, and thus having one of the highest, if not the highest, damage to ammo ratio of any non-wonder weapon.

Another thing to note that since the Mammoth has reduced fire rate, movement speed and ADS time, these can be removed by Bang Bangs, Racing Stripes and the Quickdraw attachment.

The Sentinel variant functions similarly to the Mammoth variant, having very high damage (not as much as the Mammoth). The difference in the two variants is that the Sentinel fires five pellets in a predictable vertical column (similar to a shotgun)with every shot, as well as a slightly higher fire rate. This variant can be seen as a Mauler - Mammoth and Reaver hybrid. As with shotguns, the Sentinel tends to create many crawlers in the late 20's but if one aims for headshots this isn't a problem.

This variant is also the best variant on the map Zombies In Spaceland, as when the Sentinel is paired with the Violent Arcane, it is a one hit kill until scenes 60 and up, as the five pellets always triggers the Violent Arcane's effects.

This variant thus can be seen as a Mammoth that trades a little damage for a slightly higher fire rate and having a spread shot.

The Mauler in first person

Iron sights of the Sentinel variant 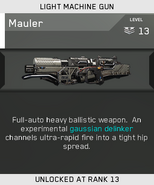 The Mauler being unlocked in multiplayer