For the fully-automatic variants, see Machine Pistol (WWII) and Escargot.

The Mauser C96 performs nearly identically to the M1911. It has very weak damage, taking multiple bullets to kill a single zombie even on the first rounds, medium firecap, a magazine of eight rounds and slight recoil.

When Pack-a-Punched via the Pack-a-Punch Machine, it becomes the Boomhilda. It fires laser bolts with extremely high damage, and it gains an increased magazine, an ACOG Scope and a Suppressor. The Boomhilda is an extremely powerful weapon with a 50 round magazine, firing lasers similar to the blasts from the Ray Gun Mark II. Despite its power and the magazine capacity, however, ammunition concerns do arise, as the player only has two extra magazines, making the total starting ammunition a measly 150 bullets. The Boomhilda is a strong weapon in its own right, but is often overlooked compared to weapons such as the staffs and other weapons on the map, such as the KSG, the M1927, and the MG08/15, because the player can only receive the Mauser through digging, keeping it when starting the game, or respawning after death. 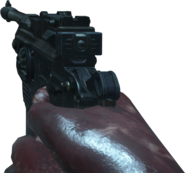 The Mauser C96 in first person 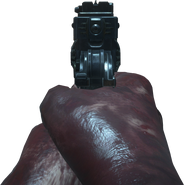 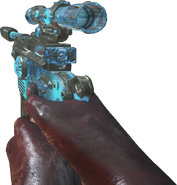 Model of the unique ACOG Scope seen on Boomhilda

The Mauser C96 returns in Call of Duty: Black Ops III, performing nearly identically to the MR6. It features an edited model and a brighter finish.

In Black Ops III, it is possible to Pack-a-Punch the Mauser C96 multiple times, allowing it to gain the Pack-a-Punch attachments (Blast Furnace, Dead Wire, Turned, Thunder Wall, Fireworks). This is the only starting weapon for which this is possible. Unlike its Black Ops II variant, which fires lasers identical to those from the Ray Gun Mark II, it fires blue lasers with sounds similar to those from a sniper rifle or the NX ShadowClaw.

The Mauser C96 makes a brief appearance in the The Giant poster being held in a dual-wield manner by Edward Richtofen. 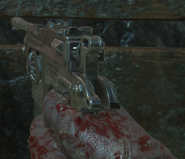 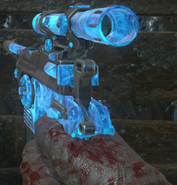 The Mauser C96 makes a brief appearance in Black Ops 4, being held by Edward Richtofen in the poster of the Zombies map Blood of the Dead.

The Mauser C96 held by Richtofen in the poster