For the sniper variant, see Maverick-A2.
For the trophy/achievement called "Maverick" on Xbox, see Flying Ace.

The Maverick, known within the game files as the RM-22, is an assault rifle that appears in Call of Duty: Ghosts. The weapon can be accessed by purchasing the Onslaught DLC for $14.99, or paired with the Maverick-A2 in a separate pack for $3.99.

However, the Maverick has negative body multipliers. If a bullet from a Maverick strikes the enemy in the limb, the bullet will do five percent less damage. This normally doesn't make a difference, but at ranges where the Maverick is dealing fifty damage per bullet, a single bullet striking the limb will lower the Maverick from a two shot kill to a three shot kill. The Maverick is a weapon that can kill very quickly in CQC thanks to its two shot kill potential barring a shot to a limb, and it also has acceptable power at medium-long ranges. The Maverick earns no extra damage on a headshot, so it is ultimately pointless to go for headshots. The Maverick has medium penetration power.

The Maverick's fire rate is poor. The Maverick has the third slowest default fire rate in its class, firing at just 652 RPM. Among fully automatic assault rifles, only the Remington R5 fires slower, and not by a much. This harms the Maverick's performance at medium ranges, as weapons with higher rates of fire can outgun the Maverick.

The Maverick has a standard magazine capacity of thirty rounds, and a standard starting ammo loadout of ninety rounds.

The modification attachments are all available on the Maverick.

Burst Fire will reduce the Maverick's range benchmarks by 25%, make the hip-fire spread twenty percent larger, increases recoil per shot by fifteen percent, and lowers the Maverick's centerspeed to 1275. The Maverick fires at 652 RPM within the burst, and fire at 378 RPM overall. The Maverick with Burst Fire gets the same enhanced body multipliers as the semi-automatic Maverick does. Although the Maverick can counteract the recoil increase this attachment provides with its built-in recoil reduction, the disadvantages are too significant, and the two shot kill range is too short to justify using this attachment on the Maverick.

Armor-Piercing is a harmless but situational attachment that allows the Maverick to bypass the health benefits conferred to enemies using Ballistic Vests and Juggernaut armor.

Extended Mags is a purely beneficial attachment that increases the Maverick's magazine capacity to 45 rounds and the starting ammo loadout to 135 rounds. This comes at no disadvantage to the user.

The Maverick also appears in Extinction mode, in every DLC map except for Mayday. It costs $1500.

The Maverick is a spiritual successor to the AK-12, serving the same role as a powerful, slow-firing assault rifle with large forty round magazines. Compared to the AK-12, the Maverick has much heavier recoil, but makes up for it with a faster rate of fire and a much faster reload speed. The inaccuracy of the Maverick can be a problem on Awakening and Exodus which feature much more long range combat than Nightfall and forces players into firing full auto at long ranges. A Grip will reduce the Maverick's per shot recoil greatly to assist with its recoil problems. The Maverick's cheapness and versatility, in addition to it being accessible very quickly on the maps it's available in, makes the Maverick a very popular choice.

For the attachment images, see Maverick/Attachments.

The Maverick in first person 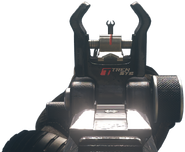 Render of the Maverick's model

Third person of the Maverick

The Maverick as seen in the Onslaught poster

A soldier wielding the Maverick

Render of the Maverick