Call of Duty Wiki
Register
Don't have an account?
Sign In
Advertisement
in: Call of Duty: Ghosts Sniper Rifles

"Semi-automatic. Uses custom LAB DIGITAL A2 Tracker Scope. Deadly from the waist up with moderate mobility and recoil."
— Description.

The Maverick-A2, or RM-22 as it's referred to within the game files, is a sniper rifle that appears in Call of Duty: Ghosts. The weapon can be accessed by purchasing the Onslaught DLC for $14.99, or paired with the Maverick in a separate pack for $3.99. It has an integrated Tracker Scope. The Tracker Scope functions in the same way as the Tracker Sight but as a sniper scope.

The Maverick-A2, when purchased with Onslaught, is a free Sniper Rifle. It can also be purchased in a standalone package alongside the Maverick for use even with DLC not purchased.

One of the Maverick-A2's big advantages is its fire rate. It is tied with the VKS for the highest firecap among all sniper rifles, with a firecap of 400 RPM. This allows users to quickly dispense follow-up shots when needed, although there aren't many situations where firing at the firecap is effective outside of close range due to accuracy.

The Maverick-A2 has the standard assortment of sniper rifle attachments available.

The Variable Zoom gives three alternative zoom levels that the user can adjust between. This is a good choice if the users want to use the Tracker Scope to its full potential.

The Silencer will make the Maverick-A2 quieter when firing and prevent the user from appearing on radar when firing, but it will prevent users from getting a one shot kill to the lower torso. The Maverick-A2 is a decent choice for the Silencer thanks to its larger magazines and softer recoil. The Maverick-A2 can fill a niche as an alternative to the VKS, providing more accurate fire and better lethality at long ranges compared to the VKS.

Extended Mags increases the Maverick-A2's magazine capacity to twelve rounds, and increases the starting ammo loadout to 36 rounds. This attachment is never a bad choice, and given that the Maverick-A2 is not the best at getting one shot kills, it tends to need more bullets than its contemporaries.

Armor Piercing allows the Maverick-A2's bullets to ignore the effects of Ballistic Vests and deal much more damage than it otherwise would to Juggernaut armor. The Maverick-A2 can become very effective against players that tend to employ these pointstreaks as a result, and it never hurts to use the attachment.

Overall, the Maverick-A2 is a very unusual sniper rifle that makes up for slightly less lethality with great accuracy. It lends itself to a much more aggressive form of sniping, one that relies more on follow-up capability and the occasional use of multiple shots in rapid succession compared to other snipers. The Tracker Scope also provides the possibility of extra class versatility by providing a scope on similar footing to the Thermal Scope. In a traditional sniping role, however, the Maverick-A2 can feel lackluster due to its lower one shot kill consistency. Much of the Maverick-A2's value is the dependent on the user taking advantage of its superior recoil and centerspeed to increase their volume of fire when the situation calls for it, as otherwise, any of the other sniper rifles would serve the player better. 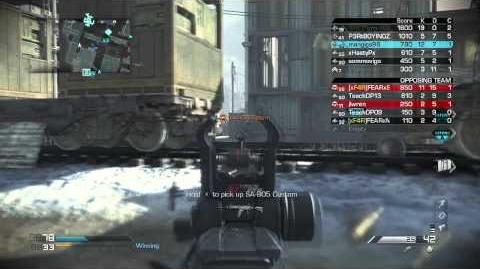 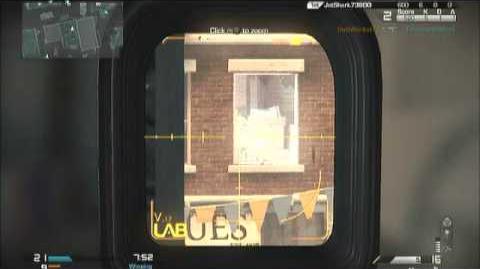 The Maverick-A2 in first person with Ocean Camouflage

Aiming down the Maverick-A2's default scope

Third-person view of the Maverick-A2

The Maverick-A2 with an ACOG Scope

Render including some parts of the Maverick-A2's model

Another view of the scope's model

The Maverick-A2 as seen on the Onslaught poster

A soldier wielding the Maverick-A2