Call of Duty Wiki
Register
Don't have an account?
Sign In
Advertisement
in: Call of Duty: Black Ops II Zombies 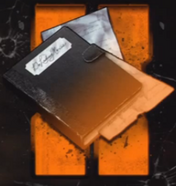 The Maxis Diary is a series of diary entries written by Dr. Ludvig Maxis, the leader of Group 935 in the original dimension. These diary entries are found through updates of Zombies when the player chooses the option for playing online.

Study #0804 and Study #099 have been later adapted into radios for the map The Giant, with several changes made.

It has become apparent to me that not all humans are created equal when it comes to surviving the current state of this world.

Through discovery, one can find an Easy switch in the Custom Games options. If one has any desire to uncover the mysteries of this new world and support my crusade against the megalomaniacal Dr. Richtofen, one must survive the Original hordes.

I have added a Ranking System, Stats and Leaderboards to track their progress. I have also provided new ways to challenge the more Hard Core specimens: 'Headshot Only' in Custom Games is one example amongst many. New game types and Custom Games will allow me to better separate the wheat from the chaff.

Though our matter transference tests at the new site have been largely unsuccessful, the teleporter's malfunction has nonetheless yielded some interesting data.

The fact that the test subjects departed their original point of origin is undeniable. What is uncertain is what became of them. Doctor Richtofen is insistent in his belief that they have been transported not through space - but through time. In the absence of empirical evidence, I myself cannot entertain such... madness.

I fear that the good Doctor's increasing irrationality may soon prove a liability to our endeavours...

I fear that time is running out.

Though my understanding of the ethereal realm remains limited, I am convinced that the manipulation of the energy fields within all matter is vital to uncovering the dimensional gateway itself.

It is my sincerest hope that somewhere in the realm beyond, my beloved Samantha still lives.

I can only pray that Edward's insatiable lust for power does not prove catastrophic.