"Meat" was the codename of a character in Call of Duty: Modern Warfare 2, Call of Duty Online and a member of Task Force 141.

He was seen in the level "Takedown", chasing Rojas's assistant through the streets with Captain "Soap" MacTavish, Sergeant Gary "Roach" Sanderson, Ghost, and Royce. Later, Meat went with Roach and Royce to the favelas to hunt down Rojas. Royce ordered Meat to clear the area of civilians, only to alert the local militia. Meat, Royce and Roach then fought through the Favela. Meat was eventually overwhelmed and killed. 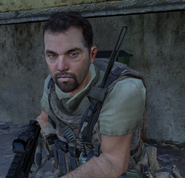 One of Meat's possible appearances.

Meat in "Takedown".
Add a photo to this gallery

Retrieved from "https://callofduty.fandom.com/wiki/Meat?oldid=2548074"
Community content is available under CC-BY-SA unless otherwise noted.