The map is set in a nuclear power plant, located in Pakistan.

It features five main sections, the first two being the reactor chimneys, third and fourth being the two-story reactor controls, and the cooling fluid disposal area. The map encourages medium-range engagments overall.

Spawn point for the Militia.

A small room providing quicker access to the cooling tower side of the map from the Militia spawn point.

Upstairs of the control room building. The large window in the center overlooks the center of the map.

The center of the map, providing access to all four major areas of the map (cooling tower, outflow, control room, and administration) from the top, and a tunnel allowing quicker access from one spawn-facing end to the other.

The cooling outflow, providing an alternate route around the map with longer sightlines.

The interior of the cooling tower.

Downstairs of the administration block. 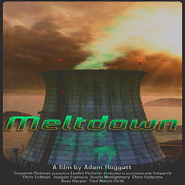 An aerial view of Meltdown.