Officers from the MPS are seen controlling the crowds during "Mind the Gap". Their vehicles can also be seen in the multiplayer map "Underground".

The Metropolitan police service appears in the second mission Piccadilly, assisting Kyle Garrick and his team fighting against Al-Qatala terrorists during the attack.

Metropolitan Police waiting outside the Palace of Westminister (Parliament)

An Officer holding a SPAS-12.

A police car used by the MPS. 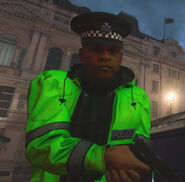