For more uses, see Mi.
For a similarly-named weapon, see MR-28.
For the DLC in Call of Duty: Advanced Warfare, see Havoc.

CoD4: The Coup, Safehouse, One Shot, One Kill, Game Over
MW2: Wolverines!, Of Their Own Accord, Whiskey Hotel
MW3: Persona Non Grata, Goalpost
CoDG: All or Nothing

"Good night, ya bastard."
— MacMillan in One Shot, One Kill, after shooting down an Mi-28.

The Mi-28 is first seen during the level "The Coup" being used by Al-Asad's military near a dock. The first time it can be interacted with is in "Safehouse", where it serves as a Loyalist gunship in support for Captain Price's SAS team in Azerbaijan following the detonation of a Nuclear Device by Vladimir Makarov in the Middle East. In "Safehouse" the Mi-28Ns' callsign is Mosin 2-5 , as stated by the crew, most likely the pilot. The Havoc is next seen in a flashback mission, "One Shot, One Kill", where several are used by Ultranationalists in Pripyat. Two are brought down by a pair of SAS Snipers— then-Lieutenant Price and Captain MacMillan. One is destroyed by Price using an M82 and the other almost crushes MacMillan as it crashes, injuring him. The final occurrence of these helicopters is in the level "Game Over", where a Loyalist Havoc destroys an Ultranationalist Mi-24 Hind, causing enough of a distraction for John "Soap" MacTavish to kill Imran Zakhaev and his escorts. 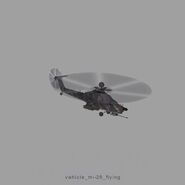 Side view of the Havoc in "One Shot, One Kill", during the sniper sequence.

The Mi-28 Havoc appears heavily, as it is the primary attack helicopter for the Russian military during their invasion of the United States. It has virtually supplanted the Mi-24 Hind in most of the campaign. Two Havocs are engaged in "Wolverines!", where they attempt to attack the player's squad and hinder their extraction. In "Of Their Own Accord", multiple Havocs are seen attacking the Washington Monument evacuation site, and the World War II Memorial has been seized and is used as a forward Mi-28 refueling/rearming station.

The Mi-28 "Havoc" is the helicopter used in Chopper Gunner (11 kills without dying) if the player is on the OpFor , Spetsnaz , and Brazilian Militia teams. Task Force 141 , the U.S. Navy S.E.A.L.s, and the U.S. Army Rangers use the AH-64 Apache. The Havoc is referred as "chopper" or "helicopter", unlike Apache, as the announcers for the foreign factions inform the friendly Havoc as "Friendly chopper/helicopter inbound" and "Enemy Apache incoming". The American/British factions say "Friendly Apache inbound" and "Enemy chopper/helicopter incoming" instead.

An Mi-28 in multiplayer.

A Havoc going down.

Before being hit by a Stinger missile.

In "Of Their Own Accord".

Mi-28 flying over the map Afghan, while the player uses Chopper Gunner killstreak.

The Havoc also appears frequently as an enemy in some missions, usually as a target or a specific enemy that must be eliminated.

The Mi-28 returns; they are seen in multiple missions, such as "﻿Goalpost" "Blood Brothers" and "Persona Non Grata".

A wreck of an Mi-28 Havoc is seen at the end of All or Nothing, crashed on the USS Liberator as Logan and Hesh make a run for the Blackhawk.

Mi-28 Havocs can be seen randomly flying above the player's base.