It makes its first appearance in the campaign mission "The Coup" and is seen throughout the entire game. It operates as a troop transport for the majority of the game, transporting enemy soldiers who fast-rope from the helicopters. One notable example of the Mi-8's role in the game is during the campaign mission "Hunted". After being shot down in Western Russia, Captain Price, John "Soap" MacTavish, Gaz and Nikolai are pursued by Ultranationalist forces. In the level "War Pig", two Mi-8s are seen dropping OpFor troops, but the player can shoot them down with RPGs. Eight Mi-8s appear in the campaign mission "Heat", five while Soap is covering the SAS commandos' retreat with a minigun, and three after entering the fields in front of the barn. In fact, it is possible to shoot down all five helicopters to prevent more troops from appearing later on. It is also seen dropping troops at the end of "One Shot, One Kill", during "Shock and Awe" and during "Ultimatum". In the last two levels mentioned, it is possible to shoot them down with RPGs or the M203 Grenade Launcher, although three shots are necessary.

In Acts 2 & 3, most Mi-8s can be shot down, using the RPG or the M203 Grenade Launcher, although three shots are needed to do so.

Two Loyalist Mi-8s appear in "Game Over". Sergeant Kamarov and his forces fast rope down to rescue Captain Price and Soap MacTavish after the latter kills Zakhaev. When in the air, it always has its hatch open.

In mission Hunted, it is possible to destroy Mi-8 without a Stinger. To do this, player must cook a grenade, and throw it inside the helicopter. If done correctly, Mi-8 will blow up and fall down. However, the player cannot continue with mission, as the Mi-8 is already destroyed.

Two Mi-8s being shot down.

OpFor soldiers roping down a Mi-8.

In Call of Duty: Modern Warfare 2 the Mi-8 is used throughout most of the levels involving Russian forces and is featured multiple times throughout the game. Unlike the Call of Duty 4: Modern Warfare variant, the Mi-8 can now be downed with a single shot from a M203. The Mi-8 can be seen dropping off troops in several missions, notably in "Exodus", in which the player can direct Honey Badger to shoot them down if the player designates them as targets. They are also seen airlifting vehicles in the level "Contingency". It is also used by FSB airport security in "No Russian". There is also an Mi-8 that appears as a static object on the multiplayer map "Highrise". They also appear at the end of the Special Ops mission Suspension, dropping in troops. Since the mission Overwatch is based on Hunted, Mi-8s appear heavily in the level, dropping troops in. They can easily be destroyed by any of the AC-130's weapons, although the 25mm gun is much more effective. However, they don't show up as any kind of heat signature or target, so the player on the ground typically has to target them using the laser designator in order for the gunner to see their position. Also they don't seem to be solid objects, as the laser designator's beam often passes right through them depending on the angle. This can only be seen through the eyes of the AC-130 gunner.

Players will encounter the Mi-8 six times during the campaign: 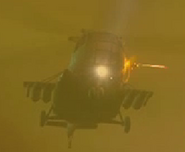 An Mi-8 gunship as seen in Call of Duty: Black Ops.

Two Mi-8 Hips in Redemption, while Mason tries to shoot them down with the Valkyrie Rocket Launcher. 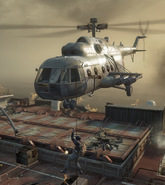 The Mi-8 (now referred to as Mi-17) returns in Call of Duty: Modern Warfare 3 and can be seen dropping in enemy Juggernauts in Survival Mode. They cannot be shot down, even with a Predator Missile.

It appears in the campaign multiple times rappelling soldiers to assault the player. Makarov and the Inner Circle use an Mi-17 in "Turbulence" to ambush the FSO and capture President Vorshevsky. In "Back on the Grid", an Mi-17 is used by Makarov to transport the chemical weapon out of Sierra Leone, which Task Force 141 fails to stop. Russian Forces rappel from Mi-17s in "Persona Non Grata", "Bag and Drag" and "Iron Lady". Mi-17s are transporting BTR-80s around Prague in "Eye of the Storm" and the Czech Resistance shoots one down over a courtyard.

A Mi-8 with a spotlight.

The Mi-8 (now referred to as Mi-17) appears in the mission "Fission". It serves as an evacuation transport for KVA personnel after the nuclear power plant in Seattle goes critical.

Barkov's Forces make use of Mi-8's during the Invasion of Urzikstan and throughout the Urzikstan Insurgency conflict. In "Proxy War", a large number of them are stationed at a Russian Military Base and can be seen being utilized by the faction as a troop transport vehicle throughout the campaign. During “Hometown”, Mi-8s are seen flying over Rizyabbi. Barkov also attempts to escape in an Mi-8MTV-5 in, "Into the Furnace".