Deceased (in real-life and if cycle is broken in Purgatory)
Alive (if the cycle continues; is revived each time the cycle restarts)
Freed later Erased (Purgatory)

For the similarly named character, see O'Leary.
"You've killed before, Finn, but it was always business. Not this time though, pal."
— Finn O'Leary

Before his imprisonment on Alcatraz Island, Finn ran gambling rackets for Sal Deluca, including bookmaking. He was also married to a silent film actress Angelina Bow, which is described an aspiring starlet with delusion of grandeur. After being married over 6 years, Angelina asks Finn for a divorce, and Finn informed his lawyer he rejects the divorce. Later on, Bow testified and provided evidence against him when he was convicted of 16 counts of gambling fraud, thus being imprisoned on Alcatraz.[1]

As with the others, Finn attempted to escape Alcatraz, but was overrun by zombies. He is the second to be surrounded and killed, thus sent to the Afterlife.

In reality however, Arlington's escape plan never came to be and Finn, along with Billy and Sal, participated in the murder of Arlington. The three were sentenced to death on January 19, 1934. Upon learning the truth, Finn, Billy and Sal once again turn on Arlington. At this point, the players determine whether the three mobsters are killed by Arlington, or Arlington is killed by the mobsters. In the canon ending, Arlington kills the 3 mobsters and the 4 end up being spirits that roam the island.

In the blood of the dead ciphers, we learn that Finn was writing a letter to Angelina while being stuck in Alcatraz's cycle, as for Sal's request which believes it will redeem the crew's eternal souls. In the letter, Finn finally agrees to the divorce, admitting that he dragged her through Chicago's worst, and that when he didn't let her go, she found her own way out of the relationship. It is not clear whether Angelina actually obtains the letter, and Finn even doubts whether the letter itself is real.

Finn and the other mobsters appears in Blood of the dead, as spirits that roam around the island. Finn can be seen grabbing the warden along with Billy and Sal, preventing him from capturing Primis Richtofen while Arlington leads the way. In the ending cutscene, Finn is released from the purgatory once and for all, along with all the other souls trapped in the realm.

Due to The wiping of the multiverse in Tag Der Toten, all areas and characters were erased from existence, the mob of the dead crew were killed once again as a result.

Finn is somewhat aggressive, but occasionally cracks jokes and makes light-hearted comments. He seems to be proud of his Irish heritage. According to Arlington, Finn spent most of his time at Alcatraz sitting on the toilet in his cell, reading, keeping to himself. His mind is often fixated on women, particularly his wife, whom he still loves despite her betraying him.

At the end of the Pop Goes the Weasel Easter egg, Finn, Sal, and Billy can either kill Weasel, or Weasel will kill them. Should Weasel die, then "the cycle continues" and the mobsters must repeat the events of Mob of the Dead again. Should Finn, Sal and Billy die, then "the cycle is broken", meaning that the story can progress. For this reason, Weasel is alive when the events of Mob of the Dead finally ends, and the other three mobsters are dead. During Most Escape Alive, Finn appears as a spirit, holding back the Warden. He is later shown to be freed, alongside the other spirits of Alcatraz.

Finn is perhaps the second oldest out of the four, after Salvatore, having visible wrinkles. He wears the standard uniform with the shirt sleeves bunched up at the elbows with many obvious creases. The shirt also has "481B" across the top right of it. His hair is slicked back and his forehead is easily visible. He is also covered in blood, like the other mobsters, but seems to have a lot more blood on him than the others.

Finn's conviction covered in a newspaper.

Finn with a Snub Nose Python. 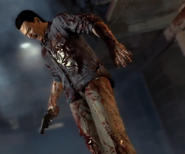 Finn with an Executioner.

Finn reading a newspaper in his cell.