Micro Turret is a payload for Stryker in Call of Duty: Infinite Warfare that is unlocked at level 45.

When the payload is used, the player will throw a Micro Turret onto the playing field, which will shoot at any enemies within its line of sight, in a full 360 degree view. The perk Blind Eye, directly counters the Micro Turret, rendering users undetectable, similar to the Shock Sentry scorestreak. 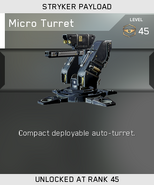 The Micro Turret being unlocked in multiplayer.