Private Miesha[1] Korolov (Russian:Михаил "Миша" Королёв) was a Russian soldier from Call of Duty: United Offensive. He fought alongside the player, Yuri Petrenko, and helped him through chaotic battles in the Battle of Kursk. He seems to be closest to Yuri, and may have saved his life in the trenches by encouraging him to not stop moving. He fights in all of the major battles that the squad goes through, the only Russian levels he is not in are the tank levels where the player mans a T-34-85 Medium tank. Initially, he was in the in the 67th Guards Rifle Division along with his squad and then is reassigned to the 15th Guards like the rest of his squad after Yuri is reassigned to his old unit. He appears to be a radio operator after the first Russian mission.

"This is madness! And you tell me the front is worse?!"
— Korolov

Korolov on the radio. 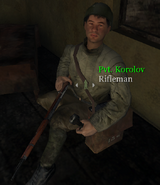 Korolov during fighting in Kharkov.

Korolov with his Mosin-Nagant.
Add a photo to this gallery

Retrieved from "https://callofduty.fandom.com/wiki/Miesha_Korolov?oldid=2387582"
Community content is available under CC-BY-SA unless otherwise noted.