Farid with a Five-seven (player-determined)

Harper first appeared in the prologue, where he, along with his teammate David "Section" Mason and several other JSOC operatives, arrived at The Vault to investigate the retired Frank Woods and his connections to Raul Menendez. Harper and Section then listened to Woods telling the story of his adventures with Section's father, Alex Mason, in 1986, and how Menendez came to be the man he is today. Such as Alex shooting Menendez in the face and Woods killing his sister Josefina, prompting Raul himself to seek vengeance.

He later appears in "Celerium", where he and Section recon an information base in Myanmar from afar. The two grapple each other from the cliffs to land, which is when Salazar and Crosby join them. The team glides down the mountain paths to the base, and break their stealth and engage the Cuban enemies there. After making their way inside the laboratories, they come across Erik Breighner, a scientist hired to inspect the properties of celerium. He introduces them to the quantum entanglement device, a chip that would make the U.S. Army infrastructure useless due to its capabilities. He also tells of Menendez's assumed superweapon called "Karma". He is shot in the neck, and the team returns fire and goes back to the lab entrance to see Briggs, who takes the celerium device.

Harper reappears in "Fallen Angel" as the JSOC dug in to investigate and record DeFalco's and Menendez' meeting. He is first seen along the rest of the team pinned down in a grocery store, until he fixes a malfunctioning CLAW by kicking it. They work their way up the flooded streets, until a bus ridden by the flood is about to crush them. However, they manage to unlock a gate with brute force and come into the Anthem. They move on, and notice an MQ Drone patrolling the area, executing looters. They sneak past it, and cut into the sewers. From there, they move onto the rooftops near Menendez' meeting, and they start investigating. They move as does Menendez, eventually leading them to an ambush, as Menendez had not only known of the infiltration, but he had engineered it. They manage to break free, and come into a courtyard full of hostiles. With the assistance of CLAWs, they clear the area and commandeer enemy SOC-Ts to exit the area. As they drive, Section and Harper come against a flaming pipe, which Harper warns of.

Harper makes a point of the close call, but makes it through with no harm. This will award the player with the Hey Good Looking achievement/trophy.

Harper will have the right half of his face burned from having it come into contact with the flames. This mark will show in later missions, although it is purely aesthetic and does not affect the story except for some extra dialogue at the start of "Karma", where he speaks on flirting with women (Salazar humorously will remind him of the burn and that "his face don't look too good").

The two run into SDC soldiers lead by Tian Zhao, who is recognized by Section as a former comrade of his father's. They are initially hostile, but after hearing the JSOC is only in Pakistan in the interests of Menendez, they turn neutral and allow JSOC to leave.

After reviewing the recording, the team learns that "Karma" is located at Colossus. Section, Harper and Salazar travel there, with the technical assistance from Farid. Harper detaches from the two to sweep the upper floors while the others breach the central database. Harper bumps into a passing woman and hits on her, but gets rejected. After Section and Salazar learn that "Karma" is not a superweapon, but a former Tacitus Corporation employee named Chloe Lynch (nickname Karma) and send an image to Harper, he notices that she was the girl he bumped into. Harper runs after her into Club Solar, telling her that he is a Navy SEAL and she is in danger. She is hostile towards Harper at first, but after knowing terrorists are after her, she seems to (shockingly) believe. However, DeFalco and a few Mercs join in the search for her, shooting hostages until she is given in. As he is about to kill another innocent, Chloe punches Harper to break free of his grab and surrenders, with DeFalco ordering his mercs to open fire on Harper and Section. The two clear the Mercs left in the club, and start chasing DeFalco. After DeFalco has detonated explosives rigged around the hotel, Harper manages to convince a shellshocked security officer to open the armory to gear up and get his men ready for combat. They chase DeFalco down, and either are unsuccessful or successful in killing DeFalco and securing Chloe before they get away.

The next chronological mission, "Achilles' Veil", marks a turning point for the character, leading to either his death or survival, depending on the player's actions. During the mission, he is heard through comms as mental support for Farid (as for being Menendez' undercover operative) and as a guide. He then tries to contact him again when Farid relocates with Menendez, and the latter shoots down the VTOL he is in. He is dragged out and held by Menendez' troops, and Menendez demands Farid to kill Harper with his Five Seven. As Farid holds the pistol on his head, the player is given an option to shoot Harper or Menendez.

Farid will look away and pull the trigger, killing Harper on the spot. Section's VTOL comes in and Menendez' troops retreat. Farid is shocked about what he's done (although Section calms him saying he had no choice), and is taken to the U.S.S. Barack Obama. Section closes Harper's eyes to respect the fallen. This outcome will make Harper not appear in upcoming missions, but is essential for Farid to live to save Karma.

Farid will aim his gun over Harper's shoulder in an attempt to fire at Menendez who is standing behind Harper, but before he can pull the trigger, Menendez pushes Farid's gun away from himself, draws his own Executioner and shoots Farid in the chest. Menendez, now knowing it was Farid who betrayed him, will lecture him about loyalty and then execute him with a shot to the face. Harper will remain alive, although he will be wounded and extracted by medevac back to the U.S.S. Barack Obama and will not appear for the rest of the mission.

During "Odysseus" (if he survived the events of "Achilles' Veil"), the siege on the ship, Harper will speak to Section only over the comms for half of the mission, he attacks many of the Jet Wing PMC's boarding the Obama. and does not actually appear until after Salazar's betrayal. After Section tells him what Salazar did, he is briefly in denial about it, but quickly catches his thoughts. Section and Harper then rush to the hangars to intercept Salazar who has surrendered without resistance. Salazar will calmly say "Today is a difficult day, Section. But tomorrow, we all win.", to which Harper responds, "Not you!" and shoots him in the head with a Five Seven, killing him. Section and Harper then evacuate the U.S.S. Barack Obama, make it to a VTOL, and escape the ship along with Crosby.

Harper then assists Section in "Cordis Die" with evacuating President Bosworth. He sits in the passenger seat of the vehicle with Section during the driving portion of the mission, and after crashing into a truck, destroys a CLAW that the player would otherwise have had to fight. He then drives the ambulance with a wounded Anderson near the end of the mission before getting out of the vehicle at the end and telling David, "You are one crazy bastard; you know that, right?"

In "Judgment Day", Harper starts out in the same VTOL as Section, and they both use Glider Wings to safely reach the ground and participate in the invasion of Haiti. While inside the VTOL, Harper voices his opinion that Menendez should be flat out murdered, stating that "Taking him alive didn't work out last time." After Menendez's broadcast is played in the control room and the U.S. soldiers who were with Section are killed by a booby trap, Harper and David proceed to attempt to intercept Menendez, who has donned a U.S military uniform, before he reaches U.S forces and escapes in his disguise. After an explosion crumbles the floor beneath them (creating a makeshift ramp), Harper tumbles down onto a broken metal rod which pierces his leg and temporarily incapacitates him. If DeFalco is alive, he will walk towards the severely wounded Harper and begin drawing his Tac-45, intending to execute him. Mason, however, slides down and grabs a KAP-40 from a dead Merc, and proceeds to kill Menendez's bodyguards (Which will consist of either two random Mercs, or DeFalco and one random Merc) before stabbing Menendez in the knee and then the shoulder. If the player chooses to spare Menendez, Harper will stand up and pull out the metal rod from his leg, saying that "If it were up to me, you'd be with your sister right now." He then limps out of the hangar and asks a soldier for some medical attention before saying his goodbye to Section. If Menendez is killed, Harper shows a sign of relief, saying that "For a while there, I thought you were gonna let that bastard live." as Section carries him out of the hangar and hands him over to another soldier. Harper then says his goodbye, and is carried off for medical attention.

He also appears in Call of Duty: Heroes as a Hero unit, unlocked after reaching Command Center level 6.

Harper and Section in "Fallen Angel".

Harper looking at his advertisement. 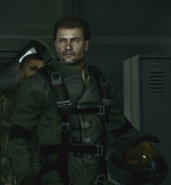 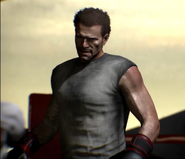 Harper in his boxing attire