"C'mon, Bitch! You want to live forever?" "
— Harper to Section in Judgment Day

Burns to right side of face (Player-determined)

Mike Harper is the non-playable deuteragonist of Call of Duty: Black Ops II.

Harper is introduced as a Seal Team Six member in the first cutscene trying to obtain information about Raul Menendez from Frank Woods. Later, Harper is seen on missions with David Mason.

The day after he, Section, Salazar, and Crosby investigate the presence of Menendez soilders at Myanmar. Here, they discovered that Menendez was planning to use Celerium as a basis for a cyber attack that could cripple the entire cyberworld. The team  found a scientist named Erik Breighner who had been brought in to process a Celerium core which would make all existing micro chip technologies usless. Though Erik was killed, he was able to give Section the Celerium core, which he later gave to Admiral Tommy Briggs who brought in an extraction team.

About one month later, Section and his team went to investigate Menendez's second-in-command, DeFalco, who was spotted in Pakistan. However before leaving, Section began seeing imiages of Menendez and himself as a child again. David then realised that Menendez played a part in Alex's death 30 years previous. Once in Afgianstan the were able to infiltrate Anthem, and managed to record Menendez's conversation with the leader of the Pakistani ISI, revealing that General Tian Zhao of the SDC was secretly forming an alliance with Menendez and that they would have a meeting on June 17. They also dissovered that Menendez had assigned DeFalco to managed to escape after almost being compromised, hbut ran into Zhao's forces. However, Zhao let them live since he assumed they were only after Menendez, and didn't know his secret because he didn't want to get captured.

The intel recorded from the conversation also revealed that Karma, which was then assumed as the cyberweapon Menendez planned to use, was on Colossus. He, Section, and Salazarwent to Colossus, and after fighting through several PMCs found out that Menendez planned to bomb the entire floating island. They also discovered that "Karma" was not a weapon, but a woman named Chloe Lynch. They located Chloe at Club Solar, but at the same time DeFalco also appeared and took several bystanders hostage. After Chloe decided to give herself in and punch him in the face, after the shoot out in Club Solar section and his team gave chase.

If the player fails to catch up to him (or intentionally fails) then he will escape with Chloe and survive. However the player will be given a second chance to save Chloe in the strike force mission "Second Chance".

I f the player catches up with DeFalco then he will return fire to the player and can be killed in a fire fight. His body will then be carried back to a VTOL by Harper and Salazar, and Chloe will be saved

During Achilles' Veil, the player, as Farid, will be given the choice of executing Harper or Menendez, choosing whether he will survive.

Shoot Harper - Should Farid execute Harper, Harper's story will end there and no longer continue (the player will no longer have his assistance). His role in Cordis Die will instead be taken by Agent Samuels. He will not be replaced on the final mission, Judgement Day, requiring the player to progress through the level without the assistance of an unkillable NPC teammate.

Shoot Menendez - Should the player attempt to kill Menendez, Harper will survive and come back in later missions, but will be casevac'ed out and unable to participate in the rest of the mission. Harper will also be unable to protect Chloe. In Odysseus, Salazar will be shot by Harper after his betrayal.

Mercs attacked the USS Obama, Harper communicates with Section though the ship (If dead it will be taken by Briggs). After Section sees Salazar betray Briggs on camera, Section reaches to the control room and tells Karma or a Navy S.E.A.L to reboot the system. Section tells Harper Salazar betrayed them. Harper and Section confront Salazar who surrendered without incident.

If Harper is dead at this point then Salazar will be taken into custody.

If Harper is alive at this point then he will execute Salazar in front of Section right on the spot.

Section and Harper escape the US Obama with Crosby

Believing that Menendez might be planning to target the U.S. President, Section took charge of escorting President Bosworth through the streets of Los Angeles amidst the worldwide chaos of Menendez's hacking. He also assisted several G20 convoys (including the Frenchs President's), and piloted an FA38 to cover the convoy from above until the reach the Prom Night Hotel.

Having finally secured the president, Section led an international team of special forces in a massive raid on Menendez's Cordis Die facility in Haiti, where the systems were being controlled. Midway, he witnessed a live broadcast by Menendez, and the self-destruction of the hacked drone army. He continued pursuing Menendez (with Harper, if he survived). As they reached a room, the floor beneath them exploded. Section managed to grab hold of the ledge, but then noticed Menendez about to escape with two Mercs soldiers (one of which could be DeFalco, if he survived; as well as Harper having his leg injured). Section slid down, while grabbing a KAP-40 from a dead soldier's holster, and shot the Mercs (and DeFalco if he wasn't killed earlier). He then stabbed Menendez twice, grabbed his Tac-45, and could either execute or capture him. After they reach the aricraft, Harper will be medically evacuated. 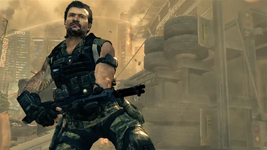 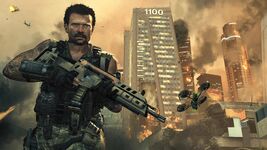 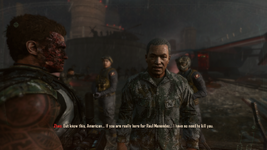 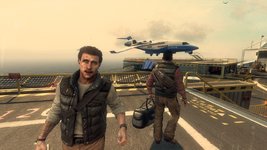 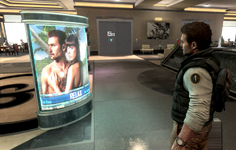 Harper looking at his ad. 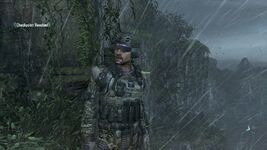 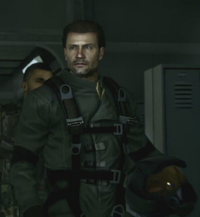 Harper in pilot suit.
Add a photo to this gallery

Retrieved from "https://callofduty.fandom.com/wiki/Mike_Harper?oldid=1892035"
Community content is available under CC-BY-SA unless otherwise noted.