For the achievement of the same name, see Mile High Club (achievement).

"Mile High Club" is a bonus campaign level of Call of Duty 4: Modern Warfare and Call of Duty: Modern Warfare Remastered; this epilogue mission is unrelated to the storyline of the game's campaign. To play the bonus mission, the player must complete the mission "Game Over" and watch the credits until the end, or quit the credits and go to the Mission Select menu or this level can be unlocked by a cheatcode.

Infinity Ward has stated that the Special Ops missions in Call of Duty: Modern Warfare 2 were inspired by this mission.[2]

The player is an unnamed Task Force 141 operative[3] battling through a double-decked aircraft to rescue a hostage in a set time limit. The time limit varies by difficulty: three minutes on Recruit, two minutes on Regular, one minute and 45 seconds on Hardened, and just one minute on Veteran. When the player reaches the objective, two big doors open revealing the hostage being held a human shield by an enemy, the game enters slow-motion and the player draws out their sidearm. The player has to shoot him either in the head or the legs (although on Veteran difficulty shooting him in the legs will result in a mission fail message on-screen) within five seconds. The player will then have 30 seconds to jump out of the plane by a breach with the VIP and the other Task Force 141's operatives.

The level features no fragmentation grenades and no explosive weapons of any type, although flashbangs are still available. 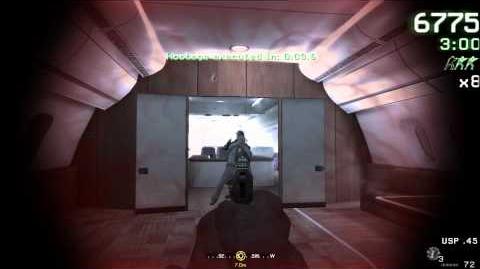 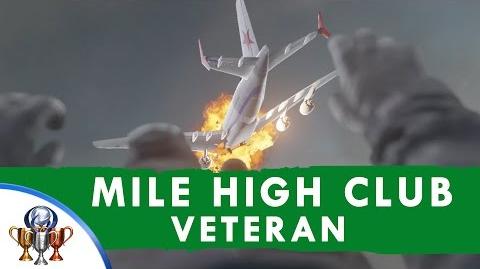 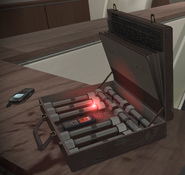 The bomb, which is almost identical to the one in Search and Destroy.

The player watches the plane after jumping out of it with one member holding the hostage.

The airplane in the original version. Note that there are no markings on it, and one cannot even see a cockpit.

The original version image shown at the end of the level.

The aircraft in Call of Duty: Modern Warfare Remastered which is actually properly rendered.

Soap's drawing of the mission in his journal.

Remastered version of the end picture.
Add a photo to this gallery

Retrieved from "https://callofduty.fandom.com/wiki/Mile_High_Club_(mission)?oldid=2566340"
Community content is available under CC-BY-SA unless otherwise noted.